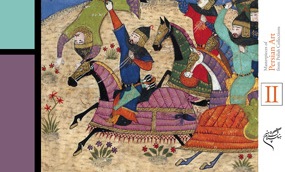 The two-volume collection of ‘Masterpieces of Persian Art from Polish Collections’ was unveiled in Iran yesterday.

IBNA: The ceremony was attended in the attendance of noted figures namely Professor of Oriental Studies at the Faculty of the University of Warsaw Tadeusz Majda, Polish Ambassador to Iran Juliusz Jacek Gojło, next Iranian ambassador to Poland Ramin Mehmanparast as well as some other cultural figures.

During the ceremony Majda said: “Cultural identity can remove any political misunderstandings. Culture is the only element which can link all the nations.”

“The book reveals Iran and Poland’s deep relationship and it also uncovers the richness of Persian artistic works; works which were well preserved by Polish institutes,” he added.

“Spending years on researching, curatorship and teaching in fields of arts particularly Islamic arts, I can say that the book is the most precious work released in the period of my work”, Majda noted.

During the ceremony Polish Ambassador to Iran Juliusz Jacek Gojło expressed his gratitude to Tadeusz Majda for bring the two countries closer and said that Iran and Poland’s ties date back to some 500 years ago. In other news, illustrious Iranian artist Aydin Aghdashloo said: “Iranians were not used to occupying lands and they exported their culture and art to other regions by different means including trading.”

The Polish collections indeed gathered the Iranian works through business and most of the works were purchased during the Safavid era, he added.

He went on to say that the two-volume collection of ‘Masterpieces of Persian Art from Polish Collections’ accommodates lost pieces of Iranian art. I am fond of Reza Abbasi’s works, who was a miniaturist of the Safavid era. I studied a lot about him, but I hadn’t seen two of his works which are included in the book.

The two-volume collection of ‘Masterpieces of Persian Art from Polish Collections’ has been rendered into Persian by Mehdi Maghiseh and Davoud Tabaei.

The book’s first volume entails the pictures of 500 works of art dating back to the pre-Islamic era which are being kept in the museums and parishes across Warsaw and Krakow.

The pictures were once displayed in a gallery in 2002 in Warsaw. The pictures are ordered in 8 sections which include manuscripts, seals, paintings, photos, earthenware, jewelry, Persian carpets and mirrors. Brief explanations along with detailed articles are also included in the book.

Furthermore, 8 articles in Persian and English are included in the second volume which focus on the cultural ties between Iran and Poland.