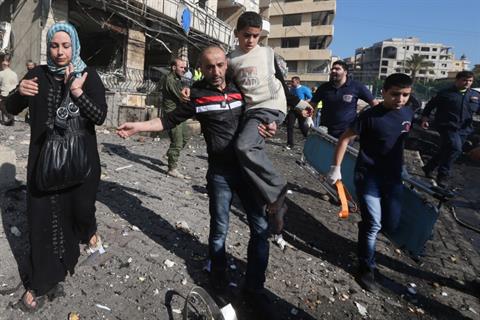 On its twitter feed, the group said the “Ali Hussein Bin Ali Brigades” carried out the attack, describing it as “the raid of the Iranian Cultural Center.” This is the group’s second such attack targeting Iranian interests in Lebanon.

The Brigades also claimed responsibility for the Nov. 19 twin suicide attack targeting the Iranian Embassy that killed dozens, including an Iranian official, and wounded over 100.

“Your brothers in the Abdullah Azzam Brigades, Ali Hussein Bin Ali brigades, claim the raid of the Iranian Cultural Center and it is a twin suicide bombing,” the group said on Twitter following Wednesday’s attack.

“It is in response to Iran’s party [Hezbollah] fighting alongside the criminal regime in Syria, and the continued detention of Muslim youth in Lebanese prisons,” it added.

It also warned that the group would continue targeting the security, political, and military centers of “Iran and its party.”

“Iran’s party will not be living in security in Lebanon until security is restored in Syria,” the group said.

The Lebanese Army has been on a manhunt to arrest members of the Abdullah Azzam Brigades after the military intelligence apprehended late last year the head of the group, Majid al-Majid.

Majid died at a military hospital soon after of natural causes.

The Army has also arrested Jamal Daftardar, the group’s second in command, who was charged last month with belonging to several related terrorist networks, including Al-Qaeda, the Abdullah Azzam Brigades and Nusra Front, and of plotting to carry out terrorist acts in Lebanon.