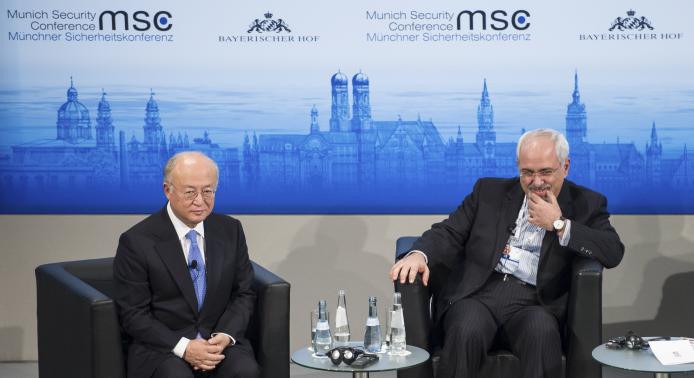 TEHRAN (Tasnim) – Iranian foreign minister and the country’s top negotiator in the nuclear talks with the major world powers held a meeting with Director General of the International Atomic Energy Agency (IAEA) Yukiya Amano in the Austrian capital today.

Mohammad Javad Zarif and the Japanese head of the UN nuclear watchdog had a bilateral meeting on Tuesday morning, ahead of a fresh round of nuclear talks between Tehran and the Group 5+1 (Russia, Britain, the US, China, France and Germany) in Vienna.

The get-together included diverse issues of discussion, with the focus on bilateral relations between Iran and Austria.

In a separate development on Monday night, Foreign Minister Zarif and European Union Foreign Policy Chief Catherine Ashton attended a working dinner and discussed the ways to begin with the new round of nuclear talks, now in progress.

The fresh round of negotiations between Iran and the G5+1 (also known as P5+1 and E3+3) kicked off officially in Vienna at 11 a.m. local time (1330 Tehran time), with a symbolic bilateral meeting between Zarif and the Ashton, who represents the six world powers in talks with Iran.

The new round of talks, which are expected to be tight, technical and complicated, are aimed at finding an ultimate, comprehensive deal on Iran’s nuclear program.