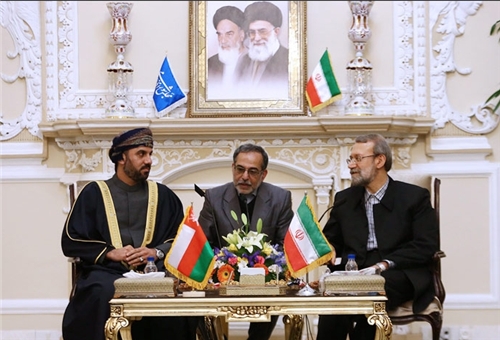 “What is happening today in the Muslim world, specially in Syria, is a painful tragedy and needs the thoughts of religious and political leaders of the Muslim world more than ever in light of unity and sympathy,” Larijani said during the meeting in Tehran on Sunday afternoon.

Syria has been gripped by deadly unrest since 2011. The western powers and their regional allies – specially Qatar, Saudi Arabia, and Turkey – are supporting the militants operating inside Syria. According to the United Nations, more than 120,000 people have been killed and a total of 7.8 million of others displaced due to the violence in Syria.

Elsewhere in the meeting, Larijani noted the very good political relations between Iran and Oman, and said the Arab Persian Gulf state has a special place in Iran’s diplomacy.

He said the two countries’ prosperous ties at political and parliamentary levels as well as their good cooperation on regional and international issues should provide a good backup for the expansion of their ties and cooperation in economic, trade and cultural sectors.

Larijani further noted the existence of very proper grounds for Oman’s partnership in Iran’s economy and industries, and said the Iranian parliament welcomes and renders support to any kind of investment in those areas.

The speaker further praised the Omani king for his rational and wise stances on regional and international issues, specially with regard to the Muslim world.

Al-Maouli, for his part, described Iran as a powerful and important country in the region with good relations with Oman, and said, “Strengthened political ties between the two countries is an undeniable reality.”

He said Omani King Sultan Qaboos feels special respect for the Islamic Republic of Iran and asks for further cooperation and consultations with Tehran on regional and international developments.

Al-Maouli called on Iran to transfer its experiences to Oman in the medical and health sectors.

Iranian officials have also repeatedly underlined that they attach great importance to the consolidation of Tehran’s relations with the Middle-East countries, specially the Persian Gulf littoral states, to protect and promote peace and security in the region.

In mid-October, Iranian President Hassan Rouhani and Oman’s Sultan Qaboos, in a phone conversation, laid emphasis on maintaining peace and security in the region, and pledged to utilize their countries’ entire capacity to enhance regional stability.

President Rouhani underscored the necessity of examining the existing potentials for promotion of Tehran-Masqat ties and called for collective efforts by all the Persian Gulf littoral states to enhance regional stability and security.

Rouhani expressed satisfaction with the restoration of security and stability to the strategic Strait of Hormuz and Persian Gulf through the cooperation of Iran, Oman and other regional states.

Sultan Qaboos, for his part, underlined the importance of regional cooperation and expressed optimism that such endeavors would yield favorable results.

Late in August, President Rouhani and Sultan Qaboos, in a meeting in Tehran, hailed amicable ties between the two nations, and called for the expansion of mutual cooperation between Tehran and Masqat in all arenas.

“The senior officials of both countries must try to further expand and deepen the bilateral relations,” the Iranian president said.

“Tehran-Masqat cooperation is very effective and important in order to restore peace and stability to the region and Iran seeks to pursue this policy in cooperation with other regional countries,” Rouhani added.

The Omani king, for his part, hailed amicable ties between Tehran and Masqat and called for bolstering trade and economic cooperation.

Sultan Qaboos expressed readiness for increasing trade ties with Iran through the North-South Corridor which is currently being established by Iran, Turkmenistan, Uzbekistan and Afghanistan.