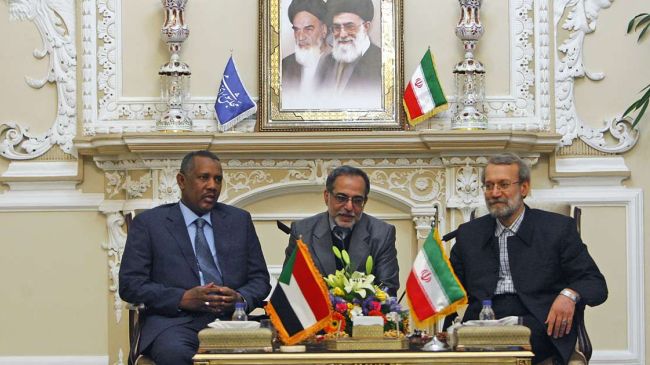 Iran’s Majlis Speaker Ali Larijani has called for further consultations and unity among political and religious leaders of Islamic states in a bid to fight extremism.

Larijani made the call in a Sunday meeting with his Sudanese counterpart Al-Fateh Ezzedin, who is in Tehran to participate in a meeting of the Parliamentary Union of the Organization of the Islamic Cooperation Member States (PUOICM).

The 9th meeting of the PUOICM, which started on Friday, is scheduled to continue until February 19. The union is composed of the parliaments of the OIC member states.

The Iranian parliament speaker said extremist Takfiri groups have tarnished the true image of Islam and the global Zionism’s support for the extremists has paved the way for their terrorist activities.

He described the PUOICM meeting as an opportunity to review ways to consolidate unity among Muslim nations and discuss major issues facing the Muslim world.

Larijani expressed hope that the visit by the Sudanese parliament speaker would contribute to further expansion of ties between Iran and Sudan in areas of mutual interest.

Ezzedin, for his part, hailed the Islamic Republic’s effort to resolve the existing problem in the Muslim world and expressed hope the PUOICM meeting could play a positive role in boosting unity among and solving the problems of Muslim countries.