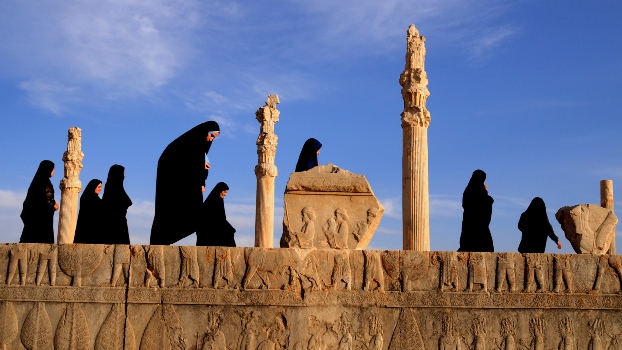 Slowly returning to the tourism map after a 35-year hiatus, Iran offers ancient sights, varied landscapes and a big-hearted welcome.

The Iran-Iraq war, not to mention glacial political relations with the west, has meant that in recent years Iran has been off-limits to all but the most intrepid travellers.

However, change is afoot. New president Hassan Rouhani and his administration have spoken of bolstering tourist numbers and easing visa requirements in the near future.

As a result, tour companies such as Wild Frontiers are already reporting a surge in bookings.

Founder Jonny Bealby says: ‘2013 was the year Iran came in from the cold. In 2014 we are seeing visitors return to explore its stunning Islamic architecture, ancient archaeological sites and dramatic mountain scenery.’

Armed with a keen sense of adventure and an Iranian tourist visa, it’s not difficult to travel overland from Turkey to Iran. The best point to cross is from the Turkish border town of Doğubeyazit, home to a couple of curious key sights: what is believed to be the remains of Noah’s Ark and a meteor crater from 1923.

From there, it is a 35km minibus ride to the Iranian border then another minibus to the Iranian town of Maku, 22km away. A five-hour bus ride onwards takes you to Tabriz, Iran’s fourth largest city.

Atmospheric Tabriz is a place to stop and appreciate, preferably with a butter-soft lamb kebab in hand. Awash with cheap hotels, rug-hawkers and cafés, it’s also home to the largest covered bazaar in the world.

For advice on travelling overland, turn to English-speaking Hossein Ravanyar, who has been assisting travellers to Iran for almost three decades. He can be contacted atwww.iranoverland.com

Iran is the 18th largest country in the world and only a tiny proportion can be explored in a single trip.

Most tourists stick to the cities of Tehran, Shiraz and the ancient Persian city of Esfahan but there are many smaller places that rank as favourites among return visitors.

‘It’s a centuries-old oasis village where there is virtually nothing but it feels like everything you’d ever need,’ he says.

His co-author, Iain Shearer, says not to miss the sunset at Persepolis and ‘the imperial palace of Darius and Xerxes, which was burned to the ground by Alexander the Great in 330BC’.

Trekkers and hikers head into the Zagros Mountains, which guard the high passes into Iran, while skiers and snowboarders travel to the Shemshak winter sports resort, just a two-hour drive from Tehran.

RIDE THE STEPPE
Iran is as much about nature as it is about exquisite man-made mosques and madrassas.

Golestan National Park is one of the finest nature reserves in the Middle East. Spanning a whopping 900sq km, it’s home to 1,350 varieties of flora and more than 300 animal species, including leopard, gazelle, wild sheep, ibex and wild boar.

Given the park’s size, one of the best ways to get around it is on horseback. This year, Iranian travel specialist Persian Voyages is offering a seven-night horse-riding adventure through the park. Sleeping under canvas, riders will be in the saddle for six to eight hours a day.