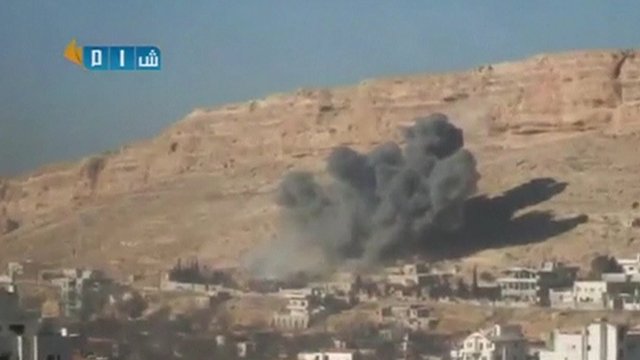 Syrian government forces have resumed their bombardment of Yabroud, the last rebel stronghold in the Qalamoun mountains, activists say.

Warplanes have been carrying out air strikes and artillery has been pounding the strategic town since Wednesday.

Residents have been fleeing to nearby Lebanon, fearful of a major assault.

There has been a surge in fighting across Syria, with both sides apparently trying to gain territory to strengthen their hands in peace talks.

After government and opposition delegates at the talks in Geneva failed to even agree a common agenda on Wednesday, the opposition National Coalition presented a paper containing their vision for a political transition.

The plan called for the expulsion of all foreign fighters from Syria and a UN-monitored ceasefire, but Syrian Deputy Foreign Minister Faisal Mekdad dismissed it as a “show” and refused to discuss it.

Troops backed by pro-government militiamen and members of the militant Lebanese Shia Islamist movement Hezbollah launched an offensive in mid-November to oust rebel fighters from the Qalamoun mountains and cut off their cross-border supply routes.

The army has already seized the towns of Qara, Deir Attiya and Nabak, to the north-east of Yabroud along the important motorway linking Damascus with the city of Homs.

Yabroud, which has been controlled by the opposition for much of the three-year uprising against President Bashar al-Assad, had until this week escaped a major assault.

But on Wednesday, warplanes and artillery began pounding the town.

A spokesman for a local rebel brigade, Liwa al-Ghuraba, said Hezbollah fighters and government soldiers were trying to position themselves on nearby hilltops.

“They are gathering their forces with the hope of taking the border road,” Abu Anas told the Reuters news agency.

“Right now no one is moving in Yabroud. The rebels are blocking the offensive.” 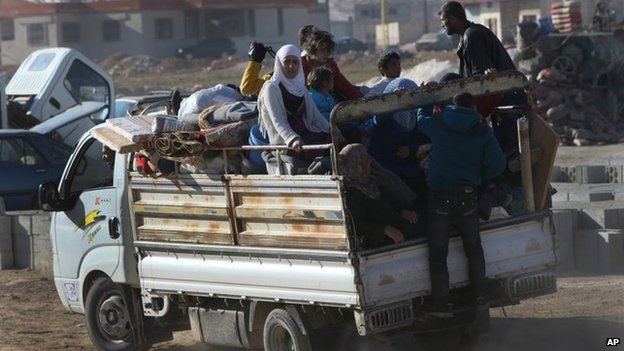 “The hospital is filling up with wounded,” he added.

The bombardment of Yabroud and the fighting on its outskirts have forced many to flee to neighbouring Lebanon, and several lorries and buses packed with people and their belongings were seen crossing the border at Wadi Hmaied on Wednesday.

“There was shelling, with planes and tanks since this morning,” Ahmed, a refugee who had travelled with his mother, wife and their four children in a van, told the Associated Press.

He had seen the bodies of five people killed by the shelling, he added.

A spokeswoman for the UN refugee agency, Dana Sleiman, said on Thursday that some 400 families had arrived in the north-eastern Lebanese town of Arsal over the past four days.