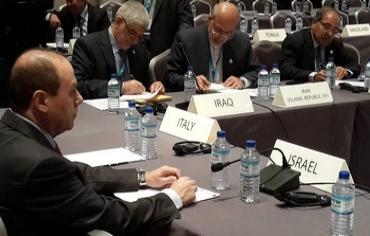 While it may be premature to discuss a thaw in relations between arch-enemies Israel and Iran, ministers from the two countries did sit down at the same table in Abu Dhabi last month, it was revealed on Wednesday.

A talk given by Energy and Water Minister Silvan Shalom in Abu Dhabi was attended by his Iranian counterpart Energy Minister Hamid Chitchiyan, reported commentator and chief of the Iran-Israel Observer, Meir Javedanfar.

This was the first Israeli delegation visit to the UAE, with which Israel has no diplomatic ties, since the assassination ofHamas operative Mahmoud al-Mabhouh in Dubai on January 19, 2010. Dubai authorities and Hamas have both accused the Mossad of carrying out the assassination. Israel has not officially responded.

Before the controversial assassination of Mabhouh, former energy and water minister Uzi Landau traveled to a similar Abu Dhabi conference on January 16, 2010, becoming the first minister to visit the United Arab Emirates.

Israeli is one of 123 member-states of IRENA, an intergovernmental organization focused on renewable energy development that is based in Abu Dhabi.

The conference was boycotted by the Kuwaiti delegation, however, not by Iran whose delegates normally walk out before the introduction of Israeli speakers at public forums.