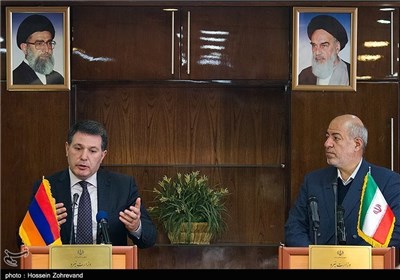 TEHRAN (Tasnim) – Iranian energy minister and Armenia’s minister of environmental protection agreed on Wednesday to step up Tehran-Yerevan joint efforts to monitor and reduce water pollution in the Aras River.

The Iranian capital of Tehran saw Energy Minister Hamid Chitchian, and the visiting Armenian minister of environmental protection, Aram Harutyunian, holding a meeting today to discuss a range of environmental issues, including active cooperation to tackle the Aras River pollution.

The rising pollution levels in the border river have been blamed mainly on the discharge of untreated sewage from an Armenia-based copper factory into the river water.

In the meeting, the two ministers, accompanied by their senior advisers, decided that Iran and Armenia should put efforts into monitoring water pollution in Aras online and take measures to stop the discharge of toxic waste from the copper factory into the river.

The Aras is a river located in and along the countries of Turkey, Armenia, Azerbaijan, and Iran. Its total length is 1,072 kilometers. Given its length and a basin that covers an area of 102,000 square kilometers, it is one of the largest rivers of the Caucasus.

The Aras River rises near Erzurum, Turkey. It meets with the Akhurian River southeast of Digor, flows along the Turkish-Armenian border, and then near a corridor that connects Turkey to Nakhchivan.