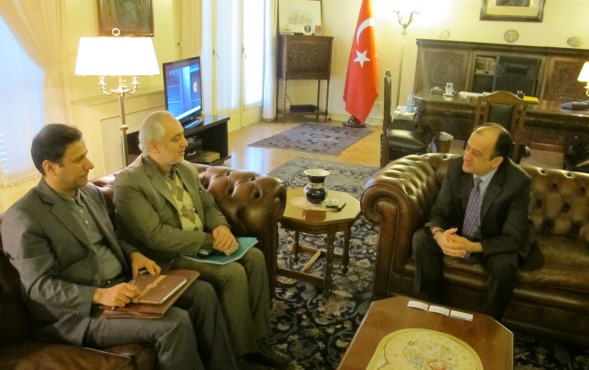 Zistboom: On Wednsday 12th February 2014, Dr Asghar Mohammadi Fazel and his team at the ECO Institute of Environmental Science and Technology (ECO-IEST) had a meeting with H. E. Mr. Emit Yardim, Ambassador of the Republic of Turkey in Iran and discussed different issues regarding activities of the IEST and the process of upgrading legal status of the Institute.

According to ECO-IEST, At the beginning of this Meeting, Dr. Fazel, President of the ECO-IEST and Chancellor of the University of Environment (UoE), briefed the Ambassador on the process of establishing IEST and acknowledged constructive and supporting role of Turkey in this process. Dr. Fazel emphasized that “if our brothers in Turkey didn’t support us, establishment of the ECO Institute of Environmental Science and Technology was not possible”.

After that, president of ECO-IEST reminding the background of previous cooperation between this institute and Turkey noted that considering the experience gained during the performance of the Institute and with respect to the huge potential and capacity of the region, IEST can perform as a facilitator and coordinator for networking, transfer of knowledge and technology, research activities, scientific and even economic cooperation in environmental issues among Member States.

Furthermore, Chancellor of the University of Environment also referring to the discussions regarding changing the status of the ECO-IEST from a project basis institute into an ECO regional center in recent Meetings of the ECO decision making bodies, hoped that just like the process of establishment of the Institute, the Republic of Turkey would also kindly provide ECO-IEST with the same level of support and cooperation at this stage as well.

Thereafter, H.E. Mr. Emit Yardim, Ambassador of the Republic of Turkey appreciating the volume and diversity of activities conducted by ECO-IEST since its establishment, asked some questions about the process of establishment, legal status and programmes of this institute and hoped that Turkey and ECO-IEST would be able to continue their cooperation on the environmental issues in the future.

At the end of this meeting, Dr. Fazel invited the Ambassador to have a visit to the ECO-IEST and the University of Environment and wished him success and a good stay during his mission in Tehran.

Economic Cooperation Organisation (ECO) is an intergovernmental regional Organisation established in 1985 by Iran, Pakistan and Turkey as the successor of Regional Cooperation for Development (RCD) (1964-1979) for promoting economic, technical and cultural cooperation. In 1992, ECO was expanded to include seven new members, namely: Islamic Republic of Afghanistan, Republic of Azerbaijan, Republic of Kazakhstan, Kyrgyz Republic, Republic of Tajikistan, Turkmenistan and Republic of Uzbekistan.
Following the proposal for establishment of a College of Environment to the ECO Ministerial Meeting (Istanbul, 2004), establishment of the ECO Institute of Environmental Science and Technology (ECO-IEST) was adopted at the 3rd ECO Ministerial Meeting on Environment (Almaty, 2006). ECO-IEST was formally inaugurated in February 9th, 2011. The Institute organises training courses, consultation workshops, regional meetings, as well as facilitating networking and exchange of knowledge and experiences, Conducting study programmes and development of regional projects are other activity fields of IEST.
By Zistboom