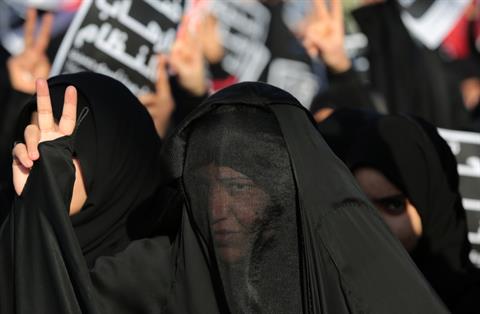 DUBAI: Pro-democracy demonstrators clashed with police in Bahrain Thursday as they marked the third anniversary of an Arab Spring-inspired uprising that was crushed with the help of Saudi-led troops, witnesses said.

It was the first of three days of protests called by the Shiite-led opposition to mark Friday’s anniversary as they seek to give new momentum to their campaign for a constitutional monarchy in the Sunni minority-ruled Gulf state.

Clouds of tear gas billowed from the streets of several Shiite villages outside the capital Manama as security forces attempted to dismantle roadblocks of burning tyres, the witnesses said.

The opposition, led by the Gulf state’s Shiite majority has been demanding that the ruling Khalifa family surrender its grip on all key cabinet posts in favour of an elected government.

“Down with Hamad,” the protesters chanted, referring to the king. “Only to Allah we kneel.”

The protesters defied a heavy security presence to set up makeshift roadblocks of felled trees and burning tyres in several villages, where persistent demonstrations have sparked repeated clashes with police.

The main Shiite opposition party Al-Wefaq, which has boycotted parliament since the uprising, posted images of protesters being tear-gassed and police in riot gear patrolling deserted streets.

Al-Wefaq said several areas observed a complete shutdown following its call for a strike on Thursday — the last day of the working week in Bahrain — ahead of a mass rally on Saturday.

The underground February 14 youth coalition has called on its supporters to try on Friday to reach Pearl Square, where demonstrators camped out for a month before being violently dispersed by Saudi-backed troops.

Saudi-led Gulf troops deployed in Bahrain on the eve of the March 2011 crackdown, manning key positions while its own security forces carried out the crackdown.

The Pearl Square roundabout and its central monument, which were a symbol of the uprising, were later razed and the site remains heavily restricted.

At least 89 people have been killed in the three years since the launch of the uprising, according to the International Federation for Human Rights.

Two rounds of national reconciliation talks have failed to make any headway on a settlement in the tiny but strategic Gulf archipelago, which lies just across the water from Iran and is home base to the US Fifth Fleet.

Crown Prince Salman, who has made several overtures to the opposition, called last month for a third round of national talks.

But many in the opposition believe his efforts have been undercut by more hawkish members of the royal family, including his great uncle Prince Khalifa, who has been prime minister ever since independence from Britain in 1971.