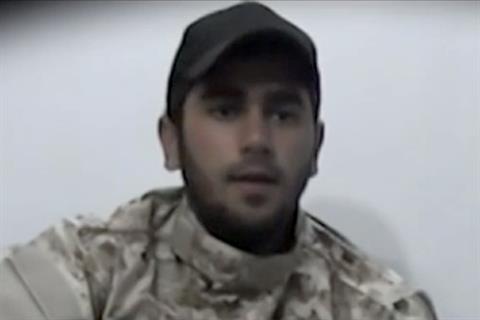 This snapshot taken from a YouTube video shows Mouin Abu Dahr, one of the two suicide bombers behind the attack on the Iranian Embassy in Beirut on Nov. 19, 2013.

BEIRUT: The Qaeda-linked Abdallah Azzam Brigades allegedly released a video Wednesday showing footage of the Nov. 19 double suicide attack against the Iranian embassy in Beirut, for which it has claimed responsibility.

The 18-minute video, entitled “The attack on the Iranian Embassy in Beirut,” went viral on social media after it was posted, although could not be independently verified.

The video includes recorded warnings from the group’s late leader, Majid al-Majid, who died last month in a Beirut military hospital, as well as from Mouin Abu Dahr, one of two suicide bombers who carried out the attack, which killed 30 people and wounded over 150 others.

“I tell [Hezbollah], the [Army] Intelligence and the heroes of the Defense Ministry, enough looking for al-Qaeda and terrorism cells, your oppression of the Sunnis is creating al-Qaeda in the hearts of the Sunni youths and a [reason] to confront you and to face the humiliation suffered by our people,” he says.

The video features excerpts from Hezbollah leader Sayyed Hassan Nasrallah’s speeches, and footage of attacks it claims are “led by Iran and its tools against Sunnis in several Arab countries” including Iraq, Yemen, Lebanon, Iran and Syria.

Majid, who was wanted by Riyadh, Washington and Beirut on terrorism charges, was detained by the Lebanese Army on Dec. 26 but died in custody of kidney failure. In the video, he warns Hezbollah to withdraw its forces from Syria.

“The operations conducted against Hezbollah so far are just the beginning; worse attacks will come if they do not withdraw all their fighters from Syria,” he says. “Let them know they will regret everything they did.”

Abu Dahr, the suicide bomber, says that he chose to take his own life attacking the embassy “to cause more losses for the enemy.”

“I chose suicide bombings rather than armed clashes because… [bombings] can reach places that battles cannot,” he says.

Abu Dahr, who hailed from the southern city of Sidon and had links to a fugitive Islamist preacher, also criticizes Iran and blames the Islamic Republic for the misfortunes of Sunnis throughout the region.

“The criminal country [Iran] is fighting Muslims, collaborating with the US in occupying Afghanistan and Iraq, supporting Huthis in Yemen, supporting the [Syrian] regime in killing our brothers and people in Syria, supporting Hezbollah in Lebanon and protecting the border in South Lebanon from the Zionist enemy,” Abu Dahr says.

Abu Dahr also reveals that he fought alongside Salafi Sheikh Ahmad al-Assir against the Lebanese Army in Sidon’s Abra neighborhood in June, 2013, “to protect my neighborhood and my religion.”

“I could never forget what happened in Abra. No one forgets the attacks against his relatives and neighbors,” he says in the video.

Abu Dahr also vows his group will continue attacks against Hezbollah, claiming that the number of “those who are ready to martyr is greater than the party’s members.”

He also calls for the complete withdrawal of Hezbollah from Syria, and the release of Islamist inmates in Roumieh prison.

The video was released following the Army’s announcement that it had arrested a Palestinian leader in the Abdullah Azzam Brigades and seized two cars in the Bekaa Valley and Beirut that had been rigged with explosives.