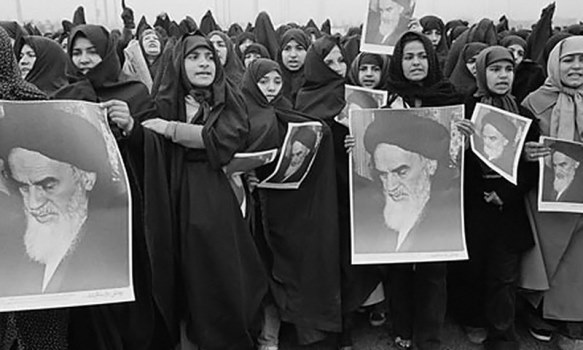 On revolution’s anniversary, Iranians ask: Is this what we were promised?

Iranians celebrated the anniversary of the Islamic revolution with rallies in downtown Tehran, but 35 years after overthrowing the shah, the merits of the revolution are still up for debate.

The Iranian children gathered on a small stage on Revolution Avenue, around waist-high columns of silver-painted plastic foam and pots of glue, wearing surgical masks and hairnets like technicians. Above them, a banner read: “Nuclear scientists of the next generation.” Large pictures of four assassinated Iranian nuclear scientists completed the scene.

It was a competition to build centrifuges to honor the anniversary of the 1979 revolution. When the models were done, the announcer tested each child’s ability to say “cen-tri-fuge,” with mixed results. The winner took home a portrait of Supreme Leader Ayatollah Ali Khamenei.

“I will be a good scientist,” says Mahdiyar, 12, when the competition is over.

“I brought my kids to show them how we got here,” says his father, Hamidreza, a government worker who gave only his first name. “From the beginning of the revolution we have been sanctioned, but the people did not abandon the regime, they supported it. This is a sign of exaltation.”

At regime rallies, such messages are as common as flag burning. But from the corridors of power to the dining rooms of Iranians, one endless topic for years has been the upheaval of the revolution and the merits of its aftermath.

“Maybe we have not reached 100 percent” with the revolution, says Hamidreza, but Iranians should “bear it and hard times will pass.”

Iranians marked the 35th anniversary of the Islamic revolution today with mass rallies trumpeting satellite launches and nuclear advances – and a virulent anti-Americanism that has defined the Islamic Republic from the start.

From face-painted children building model centrifuges to bearded volunteers handing out signs that read, “We are ready for the great battle,” Iranians are still glorifying the event that forever changed their world – but also trying to understand it.

In 1979, the unimaginable happened: the close US ally and pro-West Shah was toppled and Ayatollah Ruhollah Khomeini, the father of the revolution, returned from exile. He told Iranians not to be satisfied “just” with a new home and free utilities and bus rides. “We aim to improve the quality of your spiritual life as well,” Khomeini vowed. “We will exalt your souls.”

But has the revolution fulfilled its promise of social justice and religious enlightenment?

The answer depends upon whom you ask and how they measure progress. Many on the streets today, the true believers, praised the results.

“Our children should get acquainted with the victory of the revolution,” says Hamidreza Ansari, pushing a stroller with his infant, as his wife leads their 6-year-old daughter by the hand. “If we hadn’t reached [exaltation], we would not see so many people here every year.”

Yet a top lawmaker last week said the list of “what has not been done” was longer than the “long” list of achievements.

“The demands that are not met by the regime are also a long list,” said deputy parliament speaker Mohammad-Reza Bahonar.

Conservative politician Hamidreza Taraghi says the revolution proved that religious rule and technical advancement can coexist, and that superpowers could be let go. “It’s been 35 years since we have not been following in the steps of the US and Russia,” he says.

Though President Hassan Rouhani has declared an “end to extremism,” negotiated an interim nuclear deal with world powers, and overseen unprecedented direct contact with the US, many in the heavily conservative crowd took a harder line.

“We came here today because America oppresses all the countries,” said Darvish-Ali Nankali, an elderly laborer with a yellow “great battle” flag on a stick over his shoulder. “We came here to march against the US, the UK, and Israel – hopefully God will uproot them.”

From the podium, Mr. Rouhani echoed complaints about the US phrase “all options are on the table,” which implies that the US is keeping open the possibility of a military strike on Iran. “I say explicitly to those delusional people who say the military option is on the table, that they should change their glasses…. Our nation regards the language of threat as rude and offensive,” he said.

At the rallies, there was much belittling. Dart games featured President Barack Obama painted like the sinister Joker, along with Israeli leaders, or President Obama portrayed as an “American clown” with a red nose, an “enemy that can be made fun of by children.” One poster showed a US aircraft carrier superimposed with flames: “If they misbehave in any way” the US fleet would be destroyed “in the blink of an eye,” it boasted.

Not everyone wants to be ‘exalted’

To some, the revolution’s tumultuous history – an 8-year war with Iraq in the 1980s, the aftermath of fraud-tainted elections in 2009, punishing sanctions – proves the resilience of the Islamic Republic. But Iran also faces persistent economic inequality and deep social divisions.

“We have taken good steps exalting the souls of the people,” says Mr. Taraghi, citing a ten-fold growth in religious capacity, with larger shrines and mosques and better-attended religious events. But it is still not enough, he says.

Taraghi recognizes that such work is not welcome by more secular Iranians. “Our duty is to create the infrastructure that will allow people to [improve their souls], but we can’t force those who want to go a different way,” he says.

But more liberal, Westernized Iranians, who largely back Rouhani, have chafed under Iran’s social restrictions and hardline ideology. They helped him win a first-round victory over a slate of conservative rivals in June, celebrating the end of the 8-year era of arch-conservative President Mahmoud Ahmadinejad.

Some said they came to the rally to help support reforms, “invited” to do so by Rouhani and the reformist former President Mohammad Khatami, who remains popular nationwide but is despised by conservative factions. One female student, bare-armed and wearing red lipstick and designer sunglasses, said she was there as a “patriot.”

Soheil, a young man whose girlfriend stood out in a bright headscarf, lipstick, and nail polish the colors of the Iranian flag, looked from an overpass at those filling the wide Enghelab [Revolution] Avenue below, among them the Islamic Republic’s most conservative and loyalist citizens.

“There are a lot of people,” said Soheil, of the hundreds of thousands – official media said “millions” – who turned out today in Tehran and across the country. “But if it was the opposition coming to the street, it would be in bigger numbers.”

But the day belonged to regime supporters, and their narrative of triumphing over the enemy.

“The US says ‘all options are on the table,’ but they are lying because Iranian military might is so strong they will not dare [to attack],” says Setareh Pahlavan-Moghaddam, a school counselor. Iranians will “never back down.”

“We did the revolution for independence and freedom for our country, and not to give us cheap chicken or meat,” she says.