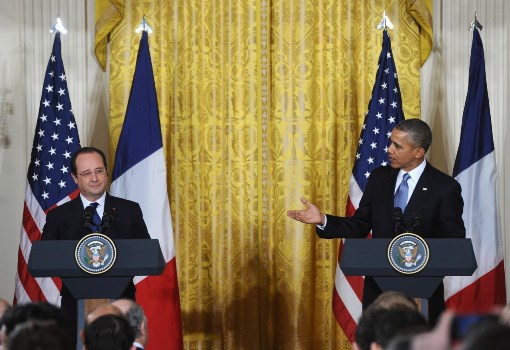 WASHINGTON — With the French president looking on, President Obama vowed on Tuesday to come down on companies that evade sanctions against Iran “like a ton of bricks.” He spoke a week after a delegation of French corporate executives traveled to Tehran looking for business opportunities amid diplomatic efforts to reach a nuclear deal.

The French executives’ visit to Tehran has crystallized fears that the interim nuclear agreement with Iran is setting off a horse race to get back into that country, and could fracture the international sanctions regime cobbled together by the United States and Europe.

Administration officials have complained publicly and privately to French officials, and Mr. Obama delivered the most pointed warning yet, even as he welcomed President François Hollande for a state visit replete with symbols of French-American amity.

“Businesses may be exploring, are there some possibilities to get in sooner rather than later if and when there is an actual agreement to be had,” Mr. Obama said at a White House news conference with Mr. Hollande. “But I can tell you that they do so at their own peril right now because we will come down on them like a ton of bricks.”

Mr. Hollande said he had warned the companies not to sign commercial agreements with Iran before sanctions were lifted. But he said the French government had no control over whether French businesses made a private trip, noting, “The president of the republic is not the president of the employers’ union in France.”

It was a rare moment of tension in a joint appearance in which both leaders tried to project an image of trans-Atlantic harmony, celebrating a rejuvenated French-American partnership on issues from Iran and Syria to counterterrorism operations in North Africa.

On Syria, however, that partnership has done little to ease the bloodshed and deepening despair — a fact acknowledged by Mr. Obama and Mr. Hollande, who devoted much of their meeting to the crisis but emerged with no new ideas for ending the civil war, beyond a general pledge to keep supporting the moderate opposition.

“We still have a horrendous situation on the ground in Syria,” Mr. Obama said, adding later that “nobody’s going to deny there is enormous frustration here.”

He said he remained skeptical that further military intervention would solve the problem, although he appeared to be groping for other options.

“The situation’s fluid,” Mr. Obama said, “and we are continuing to explore every possible avenue to solve this problem because it’s not just heartbreaking to see what’s happening to the Syrian people, it’s very dangerous for the region as a whole.”

Both leaders rebuked Russia for threatening to veto a United Nations Security Council resolution demanding that President Bashar al-Assad open relief corridors to allow the delivery of food, medicine and other supplies to people trapped in besieged cities.

If Russia blocked the resolution, Mr. Obama said, it would share blame with the Syrian government for starving civilians in Homs and other cities. Mr. Hollande added: “How can you object to humanitarian corridors? Why would you prevent the vote on a resolution if, in good faith, it is all about saving human lives?”

Both leaders tried to put a good face on what was easily their most difficult moment: Mr. Obama’s abrupt decision last August to seek congressional approval for a military strike to punish Mr. Assad for his use of chemical weapons. So firmly had Mr. Hollande backed Mr. Obama’s threat that he was preparing French jet fighters to carry out raids.

They defended the fallback agreement with Russia to remove and destroy Syria’s stockpile of chemical weapons, even if both acknowledged it had bogged down, with Syria missing multiple deadlines and only a fraction of the stockpile being removed.

“It is a very long-winded process,” Mr. Hollande said. “It’s only partial destruction and it doesn’t go nearly far enough.”

The two leaders sought to play down lingering tensions over the National Security Agency’s spying on foreign leaders and collection of telephone records overseas.

Mr. Obama reiterated his pledge to protect the rights of non-Americans, while Mr. Hollande said that after an air-clearing phone call with Mr. Obama, “mutual trust had been restored.”

Still, Mr. Obama appeared to balk at extending to France the special arrangement — often called a “no-spying agreement” — that the United States has with Britain, Canada, Australia and New Zealand.

France has sought closer intelligence cooperation with the United States, though French officials said they were not seeking the same terms as Britain.

In fact, Mr. Obama disputed that any country was immune to American surveillance. “There’s no country where we have a no-spy agreement,” Mr. Obama said, adding that the United States was in talks with France about ways to deepen its intelligence sharing.