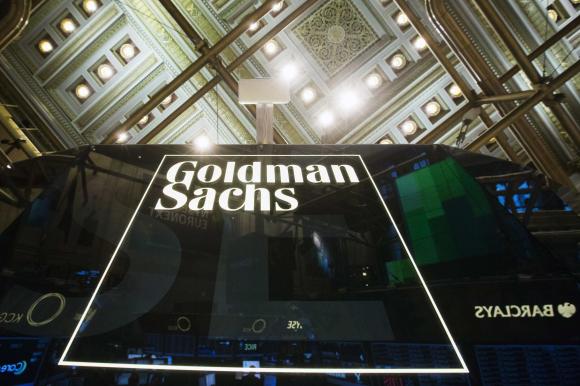 (Reuters) – Goldman Sachs and Deutsche Bank are quietly trying to get out of a business few people know they are even in: trading supplies of raw uranium known as yellowcake.

In the last four years, the banks have amassed low-grade stockpiles of the nuclear fuel ingredient larger than those held by Iran, and enough to run China’s nuclear plants for a year.

Goldman’s uranium business can trace its roots back to an apartheid-era South African trading conglomerate that sold Iran its only known source of foreign yellowcake 35 years ago. To this day, that uranium delivery underpins Iran’s disputed enrichment program, which western powers fear is aimed at developing atomic weapons, although Iran denies that.

Now, under mounting political scrutiny of Wall Street’s role in physical commoditiestrading, and following a collapse in demand after the Fukushima disaster, both firms have put their uranium trading desks up for sale. But other banks are already lining up to take their place.

The history of Wall Street in uranium markets illustrates just how far banks moved into physical commodities trading during the natural resources boom of the last ten years.

Through its nuclear trading desk, known as NUFCOR International Limited, Goldman has a deal to market the vast majority of South Africa’s uranium production from one of the country’s largest miners.

While people familiar with the business say Goldman has only sold uranium to nuclear power plants and other traders since buying NUFCOR four years ago, some have questioned whether banks should be dealing in such a politically sensitive commodity.

Though the global trade in uranium is monitored by governments, intelligence agencies, and the International Atomic Energy Agency, no single authority can trace every deal.

The details of how Iran received yellowcake from NUFCOR were uncovered for the first time by Professor Gabrielle Hecht of the University of Michigan, while she did archival research at the company’s old headquarters near Johannesburg.

“Yellowcake can be bought and sold without any significant international controls,” Hecht told Reuters.

“The nuclear industry has been campaigning for decades to banalise uranium and make it appear like just any other commodity, but it should be subject to much stronger oversight.”

Filings with UK authorities and nuclear industry sources say the two banks’ combined stockpiles of uranium are valued at more than $400 million, or around 5,000 metric tonnes (5511 tons) of yellowcake. That would be enough to fuel 20 standard nuclear power plants for a year, or, uranium experts say, to build 200 nuclear bombs.

Both Goldman Sachs and Deutsche Bank declined to comment on questions about their uranium trading businesses.

Australian bank Macquarie, which industry sources say has been talking to Goldman about buying NUFCOR, denied last month that a deal for the business has already been done.

Goldman and Deutsche entered the uranium market in 2009, when tightening supplies threatened to send prices soaring. They would grow to handle almost a third of all uranium trades in the spot market, according to industry sources.

They were not the first financial traders to be attracted to uranium. A number of specialist hedge funds started to buy and hold yellowcake in the middle of the last decade, in belief the world was on the cusp of a so-called ‘nuclear renaissance’.

They thought demand for nuclear power would soar as countries tried to curb greenhouse emissions.

Some uranium consumers blamed funds and banks for hoarding the fuel and helping to push up the price, said Jonathan Hinze, Senior Vice President at The Ux Consulting Company, which provides pricing and advisory services to the nuclear industry.

“But it’s clear that while they definitely added fuel to the fire, the fundamental reasons of growing demand and limited supply growth was the big catalyst behind the move.”

Trading firms like Deutsche and Goldman buy and hold uranium in secure warehouses licensed and designed to hold the fuel.

The raw uranium is processed into a gas called uranium hexafluoride before being enriched into fuel rods.

Market participants say yellowcake trading is not to be feared. They say traders take no risk in transporting the radioactive material, because they only take title to the yellowcake once it is in secure storage facilities.

Banks including JPMorgan and Morgan Stanley have announced plans to sell all or part of their physical trading operations in the last six months, while the Federal Reserve has faced pressure in Washington to speed up efforts to restrict Wall Street’s role in commodities trading. Deutsche said in December it was largely exiting commodities trading.

Goldman, however, has said it remains committed to its J.Aron & Company commodity business, where many of its top executives started their careers, including CEO Lloyd Blankfein. It is not clear exactly why Goldman has decided to get out of trading uranium.

Some regulatory experts say that while third-party traders generally only help facilitate the flow of uranium between miners and utilities, there are concerns the material could end up with less scrupulous buyers.

Goldman’s largest role in the global trade in uranium comes through a deal with AngloGold Ashanti, which produces almost all of the yellowcake in South Africa.

In 2009 Goldman acquired its uranium trading arm, called NUFCOR International Ltd, as part of a wider deal to buy the London-based trading desk of Constellation Energy.

NUFCOR International’s roots stretch back to 1968, when a group of private South African gold companies established the Nuclear Fuels Corporation of South Africa (NUFCOR SA) to market most of the country’s uranium, which was produced as a byproduct of their gold mining.

In the 1970s, the Shah of Iran arranged a deal with NUFCOR to supply his country with low-grade uranium for his planned nuclear energy program.

Professor Hecht found in NUFCOR’s archives the exact details of the sale for the first time.

In 1975, NUFCOR signed an agreement to supply Iran with 2,400 metric tonnes of yellowcake, Hecht says. Over the following years, NUFCOR shipped 775 metric tonnes of the fuel to Iran, before the Islamic Revolution in 1979 put the deal on hold.

NUFCOR discussed a second deal with Iran in 1984 to supply 1,485 metric tonnes of yellowcake, but the deal was eventually blocked by the apartheid-era South African government in 1986.

Nine years later – because the South African government wanted to settle the affair – the uranium that had not been delivered to Iran was sold to a New York trading company and a German electricity firm and the money was returned to Tehran.

Iran revealed its purchase of yellowcake to the International Atomic Energy Agency in the 1990s. While the IAEA has said Iran’s yellowcake stockpile came from South Africa, it has never publicly revealed the company behind the sale.

“This is the main, or possibly the only, material being used in Iran’s enrichment plants,” the World Nuclear Association says of the yellowcake delivered from South Africa to Iran.

Olli Heinonen, a former U.N. nuclear inspector who is now a Senior Fellow at Harvard University, said in an email Iran may have obtained additional yellowcake from other, unknown sources. It has also mined a small amount of raw uranium.

A spokeswoman for Iran’s Atomic Energy Organisation didn’t comment on specific questions about the NUFCOR sales, but said it is “closely cooperating” with the IAEA.

Under a deal with Tehran signed in November, the IAEA is stepping up an investigation into whether Iran has sought nuclear weapons. Iran says its nuclear program is aimed only at developing peaceful power supplies.

NUFCOR became wholly-owned by AngloGold Ashanti and FirstRand Bank in 1998, before being sold ten years later to Constellation Energy in the United States. A year later, it was bought by Goldman.

Between 2010 and 2012, AngloGold Ashanti supplied Goldman’s NUFCOR business with an average of almost 600 metric tonnes a year of the raw fuel.

An AngloGold Ashanti spokesman declined to comment on what the sale of the desk might mean for the supply agreement.

Deutsche’s business was established by a former Lehman Brothers trader, Roy Adams, who had run the uranium trading business at the ill-fated U.S. bank. While Adams left Deutsche Bank around 2011, the firm continued to market uranium from offices in London and New York. Reuters was not able to reach Adams for comment.

In December, Deutsche Bank started holding preliminary discussions with potential buyers of its uranium business after announcing it was largely exiting commodities trading.

The sale will include the bank’s trading book, including long-term deals with nuclear power plants, and a stockpile of low-grade uranium worth about $200 million. At current prices that amounts to about 2,600 metric tonnes of yellowcake.