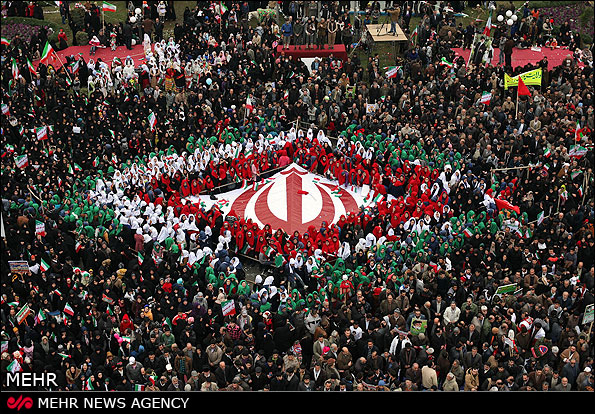 TEHRAN — Mixing exhortations of death to America with admonishments to children about healthy teeth and gums, Iran celebrated the 35th anniversary of the Islamic Revolution on Tuesday, and the state news media said millions had exuberantly participated.

At the largest rallies, here in the capital, the talks on Iran’s disputed nuclear program with world powers, including the United States, dominated the event, traditionally organized by hard-line factions that have shown strong skepticism about the negotiations.

Posters and placards were distributed bearing slogans that referred to Secretary of State John Kerry’s recent remarks that despite the discussions, the military option remained on the table for resolving the dispute over the nuclear program. Iran contends it is pursuing atomic power for peaceful purposes, but many other countries, notably the United States and Israel, suspect its nuclear program is intended to camouflage the production of nuclear weapons.

“We are eager for all options on the table,” many of the placards read, cheerfully hoisted by Iranian parents pushing baby strollers while shouting, “Death to America!” Other posters read, “We are ready for the great battle.”

Wendy R. Sherman, the lead American negotiator in the nuclear talks, was singled out for particular denunciation, with many rally participants shouting, “Death to Sherman,” the semiofficial Iranian Students’ News Agency reported. Testifying before the Senate Foreign Relations Committee a week ago, Ms. Sherman said the Iranian government had started distributing free food, after the United States released $500 million to Iran as part of a temporary agreement over the country’s nuclear program that took effect on Jan. 20.

Iranian hard-liners reacted angrily, accusing the Americans of distortion. The money — which came from Iranian accounts frozen under sanctions — had paid for the food long ago, they said, before the United States seized the cash.

Some protesters also shouted, “Death to Obama!” and “Death to Kerry!”

The rallies celebrated Feb. 11, 1979, when Iranian revolutionaries declared victory over the American-backed government of Shah Mohammed Reza Pahlavi and brought to power a government overseen by Shiite Muslim clerics.

President Hassan Rouhani, a cleric who was elected in June, criticized what he called American threats against Iran but said that if world powers negotiating with Iran over its nuclear program respected Tehran’s “rights,” they would receive “a positive and appropriate answer” from Iran. The next round of negotiations is scheduled to take place in Vienna on Tuesday.

“Iran is determined to hold fair and constructive talks based on international law,” Mr. Rouhani said on state radio. “We hope that we will see the same kind of will from the opposite side during the talks that will begin within days.”

But like his immediate predecessor, Mahmoud Ahmadinejad, Mr. Rouhani warned that threats would cost Iran’s counterparts in the talks. “If they want to repeat the unpleasant and incorrect methods of the past, they should know that they will act to the detriment of their own nation, region and global welfare and stability,” he said.

The rally was a blend of nationalist zeal and family fun. Clowns explained to children the importance of brushing their teeth. Actors re-enacted scenes from the war between Iran and Iraq. Parachutists dropped candy into the crowds.

At one stage, hundreds of people watched Pangool, a famous Iranian children’s television puppet, explain that the children’s presence neutralized American threats. “They say all options are on the table,” the puppet said, “but it is your active presence here in the rally that is our answer to them!” Some children looked puzzled, but just the sight of Pangool was an attraction, one parent said.

In the distance, the Islamic Revolutionary Guards Corps band played songs from the 1979 revolution, as one cleric, Mohammad Moshabarati, 28, marched by, holding a long pole bearing an Islamic flag. “Everything you see here is the achievement of our supreme leader, Ayatollah Ali Khamenei,” he said. “Our slogan is, ‘Death to U.S.,’ and it will be so forever, no matter what President Rouhani agrees with the Americans.”

There were reports that activists belonging to the silenced opposition movement had planned to join the rallies, and plainclothes police officers could be seen among the crowd. Social media reported the arrests of six people, but this could not be independently verified.

The Iranian government also hosted a lavish 35th-anniversary dinner buffet at the United Nations on Monday night, where hundreds of diplomats and other guests, including Secretary General Ban Ki-moon, mingled.

Iran’s military has been using the anniversary to show defiance of the United States, test firing new missiles and engaging in other acts of bravado. On Tuesday, the Fars News Agency, which is closely aligned with the Revolutionary Guards, featured interviews with senior commanders boasting about an Iranian naval flotilla’s planned voyage to the Atlantic with the intent of patrolling the United States maritime borders — the counterpoint to what the United States Fifth Fleet does in the Persian Gulf.

“All countries, including Iran, are entitled to the right to be present in the free waters, and we don’t seek to violate any country’s territorial waters,” Rear Adm. Habibollah Sayyari was quoted by Fars as saying while he participated in the annual rallies. Col. Steve Warren, a Pentagon spokesman,said Monday that the United States was not concerned.

'Death to America' chants in Iran, 1979 Revolution anniversary, 35th anniversary of the victory of the Islamic Revolution, Bahman 22 rallies, Iran's nuclear program, military strike against Iran, Quoted February 12, 2014
Iran’s tire exports rise
Ayatollah Khamenei to solve the Bahraini issue is not only with patience and steadfastness