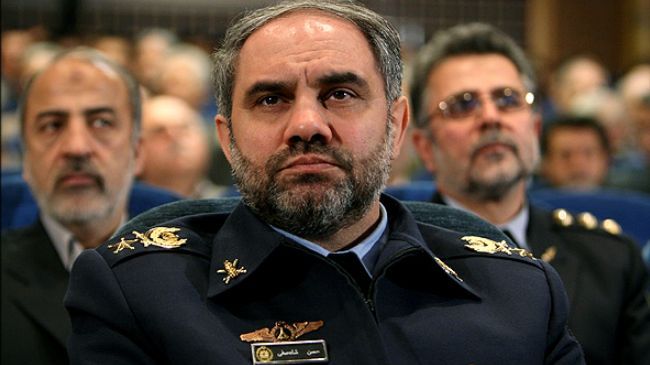 Commander of the Islamic Republic of Iran Air Force (IRIAF) says Iran’s military might has removed the option of military action against the country from enemies’ consideration.

“We are certain that the military might of the Iranian Armed Forces prevents them (enemies) from even thinking of such things,” Brigadier General Hassan Shah-Safi told a group of senior IRIAF commanders and foreign military attachés in Tehran on Monday.

He went on to say that future wars will be obviously fought in the sky with massive presence of fighter jets and rockets, adding that IRIAF has adopted a new approach and focused its entire ability on building military aircraft.

“Proper understanding of the status quo together with movement towards self-sufficiency in military hardware and personnel has evolved us to the level of preparedness that we are fully ready for any aerial confrontation,” Shah-Safi pointed out.

The remarks come as various US officials, including Secretary of State John Kerry and President Barack Obama, have recently threatened Iran with military action.

The Islamic Republic has held several military drills to enhance the defense capabilities of its Armed Forces and to test modern military tactics and equipment.