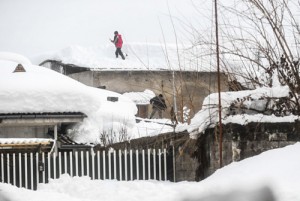 Six people have died in Gilan and Mazandaran after falling from a great height while shovelling snow from rooftops.

The crisis response branch of the ministry of health told ILNA that Gilan has seen 96 cases of people falling from heights, adding that two have been killed and another one is in critical condition.

In Mazandaran, he added, 26 falls have resulted in four deaths so far.

The unprecedented snowfall in the coastal provinces of Gilan and Mazandaran, which rarely deal with any snow, has brought daily life to a halt in many parts of the two provinces. Armed forces have been sent in to help dig out homes and buildings.