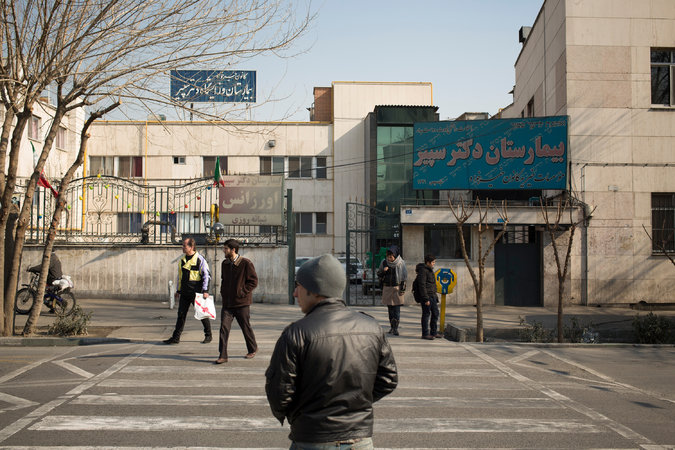 Jewish hospital a fixture in Tehran

TEHRAN — Sitting in his office at Tehran’s only Jewish hospital, Ciamak Morsadegh lit another cigarette and reminisced about how his wife left Iran for the United States after he insisted on staying.

Dr. Morsadegh, the director of the Dr. Sapir Hospital and Charity Center here, said that unlike thousands of other Jews he has never thought about leaving the Islamic Republic, for the simple reason that Iran is his home.

“I speak English, I pray in Hebrew, but I think in Persian,” said Dr. Morsadegh, a surgeon who is also a member of Parliament. “I am Iranian. Iranian-Jewish.”

Many were surprised last week when the government of President Hassan Rouhanidonated $400,000 to the Dr. Sapir Hospital, but Dr. Morsadegh was not among them.

“We Jews are a part of Iran’s history,” he said. “What is important is that Mr. Rouhani makes big news out of supporting us. He is showing that we, as a religious minority, are part of this country, too.”

Situated on Mostafa Khomeini Street — named for the son of the Islamic Republic’s founder, Ayatollah Ruhollah Khomeini — the hospital sits across from the Imam Reza Seminary school, one of the oldest Shiite seminaries in Tehran. White-turbaned clerics pass by, talking in hushed tones with their students. Though the hospital might seem out of place, local people do not seem to think so.

“When I am sick I go across the street,” Mohammad Mirghanin, a seminary student, said as he rushed to class. “They might have a different religion, but they are fellow Iranians. I do not see why I should not go to the Jewish hospital.”

On Saturday, a woman in a traditional black chador approached Khoddad Asnashahri, the hospital’s managing director and a Muslim, and asked for help.

“I went to the Iman Khomeini hospital with my daughter who needs a sonogram, but over there it costs 500,000 to man,” or roughly $200, said the woman, Zahra Hajabdolmaleki.

“We will help you here for half that amount,” Mr. Asnashahri pledged.

Named after a Jewish doctor who died in 1921 while trying to cure patients during a typhus epidemic raging through Tehran, the hospital started out as a clinic where all Iranians could come for medical care at vastly reduced rates. For more than 50 years it has been a meeting point for Iranian Jews and Muslims and the most prominent Jewish charity in the capital.

Mr. Asnashahri, who has worked at the hospital for nearly 48 years, praised the “good atmosphere” while also noting that only five Jewish physicians remained. “Many have migrated and others have bought shares in more modern hospitals,” he said.

About 96 percent of patients are Muslim, like most of the hospital’s employees. But what mattered most, he said, was the message that “here all people can come, no matter what religion, color or race.”

Though the Jewish population of Iran is dwindling — now at about 9,000, according to an official census by the Statistical Center of Iran, though other estimates range to 20,000 — the country has the largest number of Jews in the Middle East after Israel.

Dr. Morsadegh, the surgeon, has devoted his life to that diminishing community. He was a leader of the Tehran Jewish Committee, a group that supports synagogues, schools and other facets of Jewish life in Iran, and in 2008 was elected as the Jewish representative in Parliament, where five official religious minorities have a permanent seat.

He will not say that the situation for Jews and the other official religious minorities — Christian Armenians, Assyrians, Chaldeans and Zoroastrians — is perfect in Iran. The five minorities would like to see an Islamic law changed that allows one of their faith who converts to Islam to get the entire inheritance of his or her non-Muslim family, for example. Yet things are worse for evangelical Christians and Bahais, who can face prison sentences and in many cases exclusion from higher education.

Dr. Morsadegh said former President Mahmoud Ahmadinejad’s repeated Holocaust denials left psychological scars, as well. “Look, all Jews believe in the Holocaust,” he said. “It would have been much better if the former president had not raised that issue.”

President Rouhani has remained silent on the Holocaust, and in September his social media team wished Jews around the world a happy Rosh Hashana.

“It has gotten a lot better,” Dr. Morsadegh said, recalling how thousands of Jews left the country after the 1979 revolution. Many more have emigrated since then, often because of Iran’s bad economy.

Though Dr. Sapir Hospital is Jewish owned, there is not much that would remind one of Jewish heritage. On the wall of Dr. Morsadegh’s office are two portraits of Iran’s past and current supreme leaders, facing a painting of Moses holding up the Ten Commandments.

In September, Dr. Morsadegh joined President Rouhani on his trip to the United Nations in New York. Some in Iran have hinted at a connection between the president’s financial donation to the hospital and Dr. Morsadegh’s enthusiastic defense of Iran and the position of Jews in the country.

But the doctor is not bothered by those questions. “I helped out in the war with Iraq for this country, as a first aid doctor,” he said. “And I’d do it again tomorrow.”