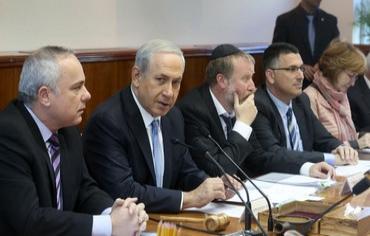 Israel launches campaign against the easing of Iran sanctions

With the six world powers and Iran set to begin talks in a week on a long-term deal to curb Teheran’s nuclear program, Israelhas launched a campaign aimed at showing how the easing of sanctions on Iran has not changed that country’s aggressive behavior.

As part of the campaign, Prime Minister Binyamin Netanyahu opened the weekly cabinet meeting Sunday by saying he wanted to comment on the sanctions relief that was given Iran as part of the interim agreement brokered in Geneva in November.

“The international easing of the sanctions against Iran has not led Iran to moderate its international aggression. The complete opposite has occurred,” he said. “The Iranian Foreign Minister recently met with the head of Islamic Jihad, Iran continues to provide lethal weapons to terrorist organizations, continues to be complicit in massacres in Syria, and now has added the following: the crude and sharp attack by the Iranian leader on the US, along with sending warships to the Atlantic Ocean.”

Netanyahu was referring to a speech Iranian Supreme LeaderAyatollah Ali Khamenei gave Saturday, in which he slammed US policy toward Iran as “controlling and meddlesome.”

Khamenei accused the US of lying when it said it did not seek regime change in Iran, and denied reports Iran sent warships to approach US maritime borders.

“What is happening here is that the international community has reduced the sanctions on Iran and Iran is stepping up its international aggression,” Netanyahu said.

Netanyahu’s comments at the cabinet, as well as the campaign arguing that easing the sanctions has not altered Iranian behavior, reflect a growing concern in Jerusalemabout increasing European interest in exploring the possibility of renewing business with Iran.

“If there is erosion of economic pressure, what leverage will there be left against the Iranians?” one official asked.

The graphic then goes on to contrast Rouhan’s words with Iran’s actions. For instance, Rouhani claims Iran’s nuclear project is peaceful, according to the graphic, while Tehran“continues developing Iran’s military nuclear capabilities.”