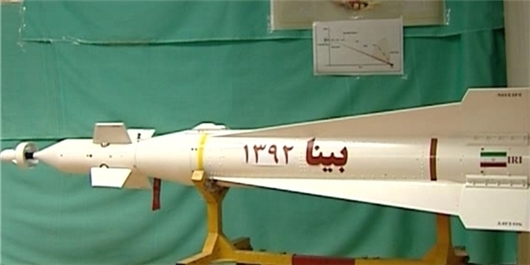 The ministry said it has successfully tested a new generation of long-range ballistic missiles with Multiple Reentry Vehicle payloads and a laser-guided air-to-surface and surface-to-surface missile named Bina.

The missiles were test-fired in a ceremony on the eve of the 35th anniversary of the victory of Iran’s 1979 Islamic Revolution to mark the occassion.

Speaking during the ceremony, Iranian Defense Minister Brigadier General Hossein Dehqan noted that Bina missile is laser-guided and can be fired from aircraft and different ground launch platforms.

He enumerated the high-speed in destroying the targets, easy maintenance and high-speed of operation as specifications of Bina missile.

The minister further noted Iran’s newly developed ballistic missile with MRV payload, and said it has been designed and produced for destroying enemy’s military hardware and all types of enemy military equipment.

“Evading enemy’s anti-missile defense systems, the capability of destroying massive targets and destroying multiple targets are specifications of this missile,” the Iranian defense minister said, but did not name the new weapon.

A Multiple Reentry vehicle payload for a ballistic missile deploys multiple warheads in a pattern against a single target. (As opposed to Multiple independently targetable reentry vehicle, which deploys multiple warheads against multiple targets.) The advantage of an MRV over a single warhead is that the damage produced in the center of the pattern is far greater than the damage possible from any single warhead in the MRV cluster, this makes for an efficient area attack weapon. Also, the sheer number of Warheads make interception by Anti-ballistic missiles unlikely.

Trajectory and Targeting of Ballistic Missiles with MRV Payloads

Improved warhead designs allow smaller warheads for a given yield, while better electronics and guidance systems allowed greater accuracy. As a result MIRV technology has proven more attractive than MRV for advanced nations. Because of the larger amount of nuclear material consumed by MRVs and MIRVs, single warhead missiles are more attractive for nations with less advanced technology. The United States deployed an MRV payload on the Polaris A-3. The Soviet Union deployed MRVs on the SS-9 Mod 4 ICBM. Refer to atmospheric reentry for more details.

“Talash (Struggle) is a mid-range and high-altitude air defense system used to confront the flying targets, including fighter jets and bombers, and is also capable of destroying different helicopters and drones,” Dehqan said in Tehran.

“Talash defense system was designed and built to detect and intercept the targets of Sayyad (Hunter) 2 missile (the country’s latest home-made missile system with high precision, range and destruction power) to protect the country’s vital and sensitive points against surprise air threats of hi-tech combat fighters,” he added.

“Now that it has had successful tests, God willing, its production line will be launched in the near future,” Dehqan said.