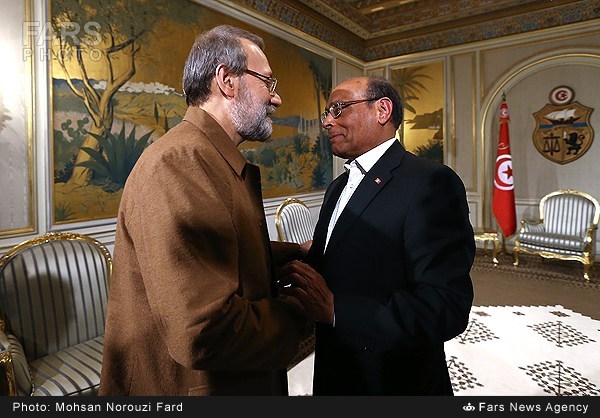 U.S. diplomats walk out of Tunisia ceremony after Iran jibe

A U.S. delegation walked out of the ceremony to celebrate Tunisia’s new constitution on Friday in protest statements made by the representative of Iran accusing the United States of undermining the Arab Spring uprisings.

“What was intended to be a ceremony honoring Tunisia’s achievements was used by the Iranian representative as a platform to denounce the United States,” the U.S. embassy in Tunis said in a statement.

“The U.S. representatives present at the NCA / Constitution Ceremony departed the ceremony due to the false accusations and inappropriate comments made by the Iranian representative present regarding the United State,” the embassy statement added.

In his address to the National Constituent Assembly (NCA), Iran’s parliamentary speaker Ali Larijani accused the United States and Israel of working to destroy pro-democracy uprisings that swept the region in 2011.

Deputy Assistant Secretary for Maghreb Affairs and Egypt, William Roebuck, was Washington’s top representative at the ceremony, which was also attended by African and Arab leaders, as well as French President Francois Hollande.

The walkout came after Larijani charged, according to an Arab translation of his speech, that Israel and the United States had “tried to render these (Arab) revolutions sterile, and to make them deviate from their course so that Israel can benefit.”

Selim Ben Abdesslem, a Tunisian lawmaker, said it was impossible to censure the speeches made at the ceremony, according to AFP.

“The Americans didn’t like what the Iranian said. He could be put in his place… but everyone is free to hold their views.”

The NCA overwhelmingly adopted Tunisia’s new constitution on January 26, in what was seen as a milestone in getting Tunisia’s troubled transition back on track, three years after the ouster of former autocrat Zine el-Abidine Ben Ali in the first Arab Spring uprising.