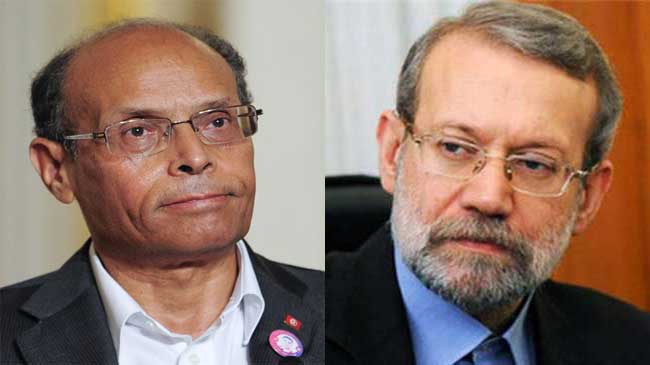 Iran’s Majlis Speaker Ali Larijani and Tunisian President Moncef Marzouki have called for the further development of bilateral ties between their countries.

In a meeting on Thursday, the two officials held talks to explore ways to enhance Tehran-Tunis cooperation in political, economic and cultural sectors.

The top Iranian official also held a meeting with Mustapha Ben Jafar, the president of Tunisia’s National Constituent Assembly, during which he described the approval of the new Tunisian constitution as a unique event for the African country.

Pointing to the woes in Muslim countries, in particular the spread of terrorism in the region, Larijani called for cooperation among all Islamic countries to counter the scourge.

He also urged more economic ties between the two countries.

Larijani also invited Jafar to attend an upcoming meeting of the parliament speakers of the Organization of Islamic Cooperation (OIC), which is slated to be held in the Iranian capital, Tehran, on February 18-19.

Jafar, for his part, said that the ratification of the new constitution in Tunisia is a major step forward toward the rule of law and a better future for the country.

Larijani has traveled to Tunisia at the invitation of the president of Tunisia’s National Constituent Assembly to take part in a ceremony celebrating the adoption of the North African country’s first post-revolution constitution.

The revolution in Tunisia led to the ouster of the country’s Western-backed dictator Zine El Abidine Ben Ali in January 2011.

On January 26, Tunisia’s National Constituent Assembly approved the country’s new constitution with 200 votes in favor, 12 against and four abstentions.

Three days later, Tunisia’s acting Prime Minister Mehdi Jomaa appointed a caretaker cabinet which was approved by 149 politicians, with 20 voting against and 24 abstaining.