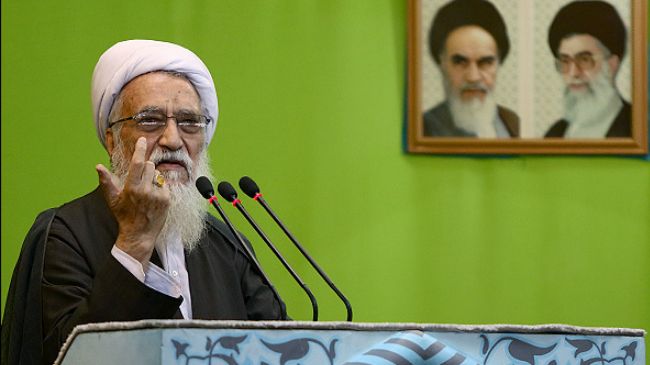 Ayatollah Movahedi Kermani made the remark while addressing a large group of Iranian worshipers here in Tehran on Friday.

Despite an agreement reached in Geneva last November by Iran and the sextet of world powers known as G 5+1 (the US, Britain, France, Germany, Russia and China), American officials in recent weeks have repeatedly insisted that the military option is still on the table.

Just on Wednesday, US Secretary of State John Kerry in a CNN interview once again threatened Iran, saying “we’ve lost nothing off the table.”

Ayatollah Movahedi Kermani also referred to this week’s remarks by US Undersecretary of State Wendy Sherman against Iran and described her remarks as “insolent”.

On Tuesday, Sherman told the US Senate Foreign Relations Committee that the food distribution plan signified how Iranian people directly benefited from the easing of the sanctions against Iran.

Tehran’s provincial Friday prayer leader said the Americans have stolen Iran’s money and now that they have returned part of that money are rudely saying that Iran helped its poor people with the money the US gave to the Iranian government.

The senior cleric urged Iran’s foreign ministry to give a strong response to such “nonsensical remarks and insolence and indecencies” by American officials.

“The more politeness (Iranian negotiators) show in the (nuclear) talks, the more insolent they (the Americans) become,” he further stated.

Elsewhere in his remarks, Ayatollah Movahedi Kermani dismissed the US allegations that Iran supports terrorism.

“They say Iran supports terrorism. Who are terrorists? Do they mean Hezbollah?” he wondered, stressing that Hezbollah is a group that are defending the dignity of their country.

He also rejected the allegations that Iran is the source of instability in Syria, Lebanon, Iraq, Bahrain, Gaza and Afghanistan.