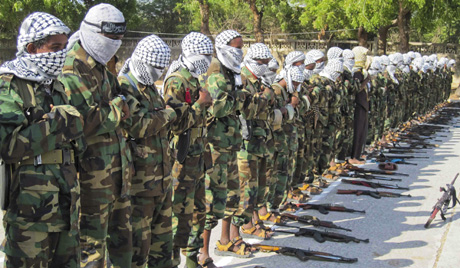 More than 50 US citizens have joined Syrian rebels and are fighting to overthrow Syrian government. Some of the US citizens, who have been trained by al-Qaeda-linked groups and have returned back to America, are under FBI surveillance, US intelligence officials said Thursday. Counter-terrorism officials fear that these trained ready-to-be terrorists will try to mount terrorist attacks in US, the Los Angeles Times reports.

“It’s probably one of the most significant threats we’re dealing with,” said a senior intelligence official who requested anonymity because he was not authorized to speak publicly.

The White House and the CIA are highly concerned that al-Qaeda linked militants train Americans and Europeans at camps in Syria and Iraq.

James R. Clapper, the US director of national intelligence, said that there are “7,500 or so” fighters from 50 countries have been trained by al-Qaeda, but he failed to name the exact number of US citizens, which means that the US intelligence cannot take under control alleged terrorist that come to the US, putting under the threat the national security.

Clapper, speaking At a House Intelligence Committee hearing Tuesday, said he was particularly worried about a small cadre of al-Qaeda operatives who have fought in Afghanistan and Pakistan and aspire to attack the United States.

He also noted, that “technologies and techniques [used by al-Qaeda]pose particular problems to our defenses.”

According to the US official, Americans go to Syria for different reasons, “some are defending their family, some fighting perceived Shiite [Muslim] aggression, some are seeking the fall of Assad, some are going for humanitarian reasons and they get sucked into the extremism, some want to participate in global jihad, and some are just adventure seekers.”

More than a dozen people who have returned to the US are under FBI surveillance, and even some of the returnees were ruled out as a threat, one senior official said on condition of anonymity, the LA Times reports.

Tracking Americans who fought in Syria has become an FBI priority, bureau Director James B. Comey has said.

Mike Rogers, the House Intelligence Committee chairman, criticized the Obama administration’s counter-terrorism policies, saying that “lack of leadership has created a growing risk aversion within our intelligence agencies as al-Qaeda has morphed and spread throughout Yemen, Syria, the Levant and Africa.” New targeting criteria for drone strikes to reduce civilian casualties, which President Obama announced last May, “are an utter and complete failure, and they leave Americans’ lives at risk,” Rogers concluded.