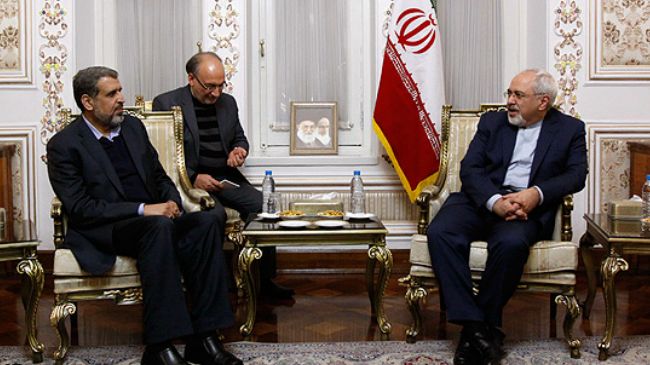 Iran Foreign Minister Mohammad Javad Zarif says Tehran has always supported Palestinian people and will continue to back their resistance and cause.

In a meeting with the secretary-general of the Islamic Jihad Movement in Tehran on Wednesday, Zarif said the resistance will undoubtedly succeed in defending the rights of Palestinians.

The Iranian foreign minister also touched on the importance of unity and convergence among Muslims.

Zarif referred to attempts aimed at spreading Iranophobia in the region, adding that they are meant to downplay the threats of the Israeli regime for Muslim nations.

Ramadan Abdullah Mohammad Shallah, the head of the Palestinian resistance movement, said Israel has for many times reneged on its promises in the so-called peace talks with the Palestinian Authority (PA).

Shallah was referring to the breakdown of several rounds of US-brokered dirsect talks between Tel Aviv and PA negotiators due to substantial disagreements.

He also stressed that the only way for Palestinians to move forward is to follow the path of resistance.

The presence and continued expansion of Israeli settlements in occupied Palestine has also created a major obstacle for the efforts to establish peace in the Middle East.

Israel conducted a self-proclaimed withdrawal from Gaza in 2005, but Israeli forces have been carrying out regular deadly forays into the sliver ever since the so-called pullout.