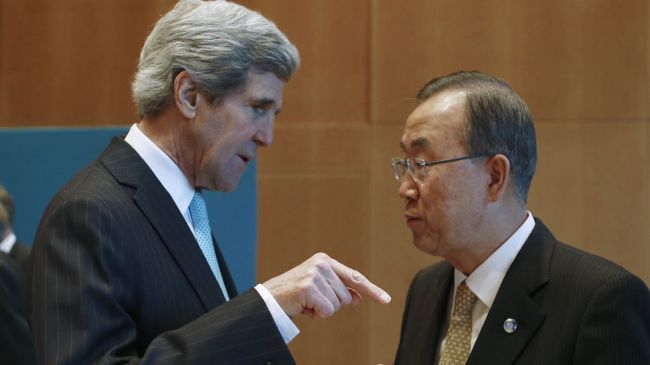 The just-concluded first phase of the international conference on Syria in the Swiss cities of Montreux and Geneva has underlined a serious crisis in the collective security apparatus of the world.

Because of his outrageous partisanship and animus against countries like Syria and Iran, United Nations Secretary-General Ban Ki-moon has manifestly lost the confidence of political circles the world over, and can no longer continue in office.  Ban’s incompetent and partial management of Geneva II is unquestionably one of the main causes for the meager results of this diplomatic effort so far.

The role of the secretary general should be to maintain an attitude of impartiality with a view to using good offices to mediate conflicts in accordance with guidance from the Security Council.  As the United Nations states on its website:  “One of the most vital roles played by the Secretary-General is the use of his ‘good offices’ — steps taken publicly and in private, drawing upon his independence, impartiality and integrity, to prevent international disputes from arising, escalating or spreading.”

But to speak of “independence, impartiality and integrity” in the same sentence with the name of Ban has now become grotesque.  Ban Ki-moon has always been a dubious figure on these points, but he has now crossed the line into partisanship and animus against two prominent anti-imperialist states.

The present writer issued a call for the Secretary-General’s impeachment in June 2012 because of Ban’s failing stewardship of the peace process for Syria, which was already obvious at that time.  Ironically, Ban Ki-moon had momentarily re-appeared as a possible honest broker for the Syrian conflict when, on Sunday, January 19, he announced his decision to invite Iran along with a number of other countries to take part in the preliminary session scheduled for Montreux the following Wednesday.

It is not known what factors contributed to such a moment of lucidity on the part of Ban, but his reasonable conduct proved to be short-lived.  First, the Syrian National Coalition, a group of NATO puppets inhabiting expensive hotels who represent precious little beside themselves, bombastically stated that they would not participate in any conference where Iran was present.  The US State Department immediately began howling that Iran had to fulfill the precondition of endorsing the communiqué issued by the first Geneva conference on Syria, held in mid-2012.  But here Foggy Bottom ran into a palpable contradiction, since Iran had been deliberately excluded from Geneva I — in large part because of US pressure.  So now Iran was expected to endorse a communiqué issued by a conference from which it had been shut out. No matter; the State Department obviously did not want the Iranian presence and Ban Ki-moon was told to find a way to keep Tehran’s envoys out.

Ban Ki-moon claimed that he had received informal assurances from Iranian Foreign Minister Zarif that Iran accepted the general proposition that the Syrian parties should agree on a transitional governing body for the country.  But now, Ban complained that public statements by Iranian officials had contradicted that undertaking.  Using this crude pretext, Ban rescinded his invitation to Iran — a diplomatic affront of the first magnitude.  Earlier Secretaries General of the United Nations had of course played favorites, but seldom had they done so in such a primitive and insulting manner as Ban.

Lavrov called this disinviting of Iran a serious mistake, and obliquely criticized Ban, noting that his about-face on Iran “hasn’t helped strengthen the UN’s authority,” and that his behavior appeared “unseemly” — a reminder that Ban had gone too far in his notorious role as a US puppet.  Lavrov correctly pointed out that the proper approach to organizing a peace conference is not to limit invitations to countries that one likes, but rather to secure the participation of all the countries whose cooperation is essential to arrive at a practical settlement.

The Iranian Foreign Minister Mohammad Javad Zarif stressed that Iran had never agreed to accept preconditions to be able to take part in negotiations on Syria, commenting:  “Mr. Ban Ki-moon contacted me several times last week and I stated to him explicitly that we don’t accept any preconditions for participating in the meeting.  We regret that Mr. Ban Ki-moon has withdrawn his offer (the Montreux-Geneva invitation) and believe that such an attitude is not appropriate for the status and dignity of the Secretary-General.”

The State Department has been alleging for many months that Iran has become a direct party to the conflict in Syria.  If they really believe that, it would necessarily follow that Iran must be invited to the peace conference without any preconditions.  But today’s State Department appears gripped by a toxic mixture of hysteria, schizophrenia, and paranoia — all radiating out from the erratic Secretary John Forbes Kerry of the infamous Skull and Bones Society of Yale University, to whom Ban Ki-moon is largely subordinated.

There can be no doubt that the blatantly servile behavior of Ban Ki-moon has done permanent damage to the office of United Nations Secretary-General.  The question is now how long the United Nations can survive as an institution if this kind of management is allowed to continue.

During the proceedings at Montreux, Ban had still more antics up his sleeve.  He had already packed the list of 40 foreign ministers scheduled to make opening statements with countries toeing the US line of implacable hostility to the Assad government, combined with blatant softness towards the terrorist rebels.  His next step was to divide the available time equally among these diplomats, with the result that both faraway Australia and South Korea were each granted eight minutes, exactly the same amount of time assigned to Syria, the country at the center of all the attention.

Syria was represented at Montreux by Foreign Minister Moallem, a figure of massive dignity with the courage to defend his country from the chorus of vilification deployed against Syria by so many US and Saudi client states.  First Ban attempted to impose his time limits by repeatedly ringing a little bell, but to no avail: Moallem continued his compelling exposition.  Then, Ban decided that it was time for a new diplomatic affront, and he interrupted Moallem like a teacher chastening and unruly schoolboy, leading to the following exchange:

Ban: Can you just wrap up please.
Al-Moallem: I came here after 12 hours in the airplane. I have a few more minutes to end my speech. This is Syria.
Ban: How much do you have left now?
Al-Moallem: I think 5-10 minutes.
Ban: No, no. I will give you another opportunity to speak.
Al-Moallem: No, I cannot divide my speech. I must continue … I will do my best to be fast.
Ban: Can you just wrap up in one or two minutes?
Al-Moallem: No, I can’t promise you, I must finish my speech. … You live in New York, I live in Syria. I have the right to give the Syrian version here in this forum. After three years of suffering, this is my right.
Ban: We have to have some constructive and harmonious dialogue, please refrain from inflammatory rhetoric.
Al-Moallem: It is constructive, I promise you, let me finish.
Ban: Within 2-3 minutes please. I will give you another opportunity.
Al-Moallem: You spoke for 25 minutes; at least I need to speak 30 minutes.

Moallem had by far the greater moral authority, since every minute that he spoke had been dearly purchased at the price of the blood of soldiers in the Syrian Arab Army.  Ban’s hooligan conduct was nothing short of an international scandal.

Ban Ki-moon’s rowdy partisanship against Syria and Iran threatens the very existence of the United Nations. With a little imagination, we can see the definite possibility of the world body splitting into two opposed camps: on the one side, an imperialist UN operating lawlessly under the cynical cover of humanitarian intervention and the responsibility to protect, made up of countries willing to subject themselves to the role of Anglo-American finance capital, with the NATO military alliance as an enforcer.  On the other side would be a United Nations of independent states, respecting the principle of noninterference in the internal affairs of its members as enshrined in the United Nations Charter, and grouped around the BRICS group of states.

In Article 100 of the United Nations Charter, we read:  “In the performance of their duties the Secretary-General and the staff shall not seek or receive instructions from any government or from any other authority external to the Organization.  They shall refrain from any action which might reflect on their position as international officials responsible only to the Organization.”  There is a very strong case that Ban Ki-moon has flagrantly violated this provision, and should therefore be removed from office.

A mirror for Ban-Ki moon: Joseph Avenol, the Fascist secretary general of the League of Nations

Ban Ki-moon’s conduct recalls ssthat of Joseph Avenol, the French pro-fascist functionary who served as Secretary General of the old League of Nations from July 3, 1933 to August 31, 1940.  Avenol played a decisive role in promoting appeasement and support of fascist aggression.  After the Nazi regime had left the League of Nations, Avenol tried to suppress criticism of Hitler in order to get Germany back into the League.  He did the same for Japan, which departed after its invasion of Chinese Manchuria.

When Mussolini attacked Ethiopia, Avenol tried to defend the image of fascist Italy rather than working to roll back aggression.  After the Franco-British sellout of Czechoslovakia at the Munich conference in 1938, Avenol purged the League of Nations Secretariat of functionaries opposed to the expansion of Nazi Germany.  Avenol thus gutted the personnel of the League, leaving it a hollow shell.  Avenol became an enthusiastic supporter of the Vichy regime of Marshall Pétain, although he never managed to convince the Nazis that he was reliable.  Here is the infamous tradition in which Ban Ki-moon is currently following.

Ban Ki-moon had already raised eyebrows at the United Nations because of his obstruction of anticorruption policies, and because of his unusual call for action Security Council against the DPRK of North Korea during the Cheonan crisis of May 2010.  The Secretary-General is supposed to represent the views of the Security Council, but Ban has always tended to ignore Russia and China in favor of obedience to the US, Britain, and France.

No Secretary-General of the United Nations has ever been impeached, but this may be the territory which the world body will be compelled to explore if Ban-Ki moon continues on his present course.