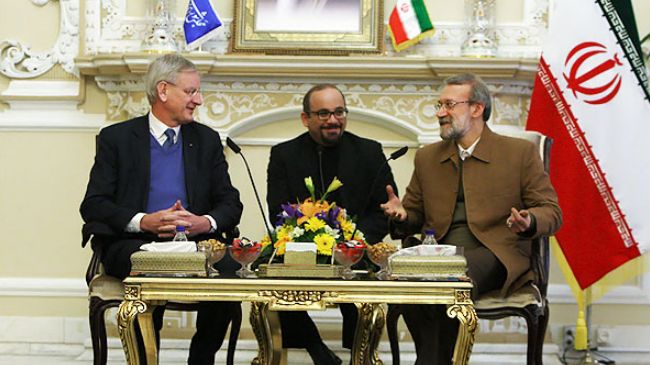 Iran’s Majlis Speaker Ali Larijani says the time is ripe for Tehran and the six major world powers to reach a final agreement through negotiations, goodwill and mutual trust.

“Iran’s membership in the International Atomic Energy Agency, acceptance of the NPT [nuclear Non-Proliferation Treaty] and the issuance of a fatwa by Leader of the Islamic Revolution [Ayatollah Seyyed Ali Khamenei] on nuclear weapons being forbidden show Iran’s determination to use peaceful nuclear energy,” Larijani said in a meeting with Swedish Foreign Minister Carl Bildt in Tehran on Wednesday.

He added that nuclear talks between Iran and the five permanent members of the UN Security Council plus Germany had many ups and downs.

The top Iranian parliamentarian urged the negotiating sides with Iran to refrain from efforts which are aimed at hindering Tehran’s access to peaceful nuclear technology.

Iran and the Sextet of world powers – Russia, China, France, Britain, the US and Germany – are scheduled to hold the next round of nuclear talks in Vienna, Austria on February 18.

“Strengthening cooperation between the two countries’ private sectors can play a very influential role in improving the level of Iran-Sweden trade relations,” the Majlis speaker added.

He also threw Majlis weight behind the expansion of all-out ties with Stockholm, particularly in parliamentary fields.

The Swedish foreign minister, for his part, expressed hope that Tehran and Stockholm would bolster bilateral trade and economic cooperation following the decrease of sanctions against Iran.
Bildt called on both Iran and the Sextet of powers to maintain their goodwill to reach a final agreement as soon as possible.