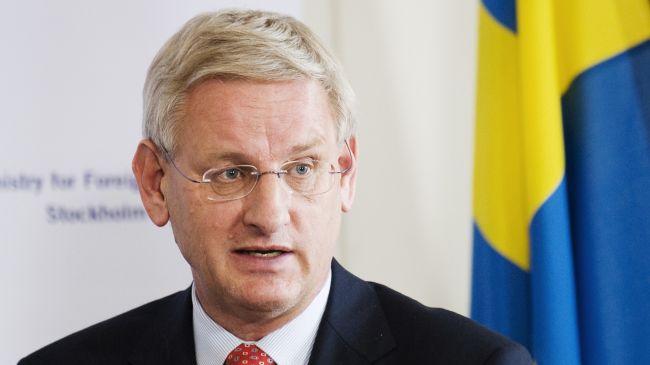 Swedish Foreign Minister Carl Bildt has called on the European Union (EU) to engage in broad dialogue with the Islamic Republic of Iran.

Bildt made the statement in a Wednesday tweet from Tehran where he is on a state visit.

The EU should “engage in new and broad dialogue with Iran. Build new trust over the gulfs of mistrust of the past,” he tweeted.

Bildt said he has “a strong sense of a society searching for a new and more open future.”

At a press conference with Zarif on Tuesday, Bildt said a comprehensive agreement between Iran and the six major world powers– Russia, China, France, Britain, the US and Germany — on Iran’s nuclear energy program is possible within six months.

Iran and the five permanent members of the UN Security Council plus Germany sealed an interim deal in Geneva on November 24, 2013, to pave the way for the full resolution of the West’s decade-old dispute with Iran over the country’s nuclear energy program. The deal came into effect on January 20.

Under the Geneva deal, the six countries have undertaken to provide Iran with some sanctions relief in exchange for the Islamic Republic agreeing to limit certain aspects of its nuclear activities during six months.

After Iran and the six powers started to implement the Geneva deal on January 20, the European Union Council suspended part of the sanctions it had imposed against Iran for a period of six months.