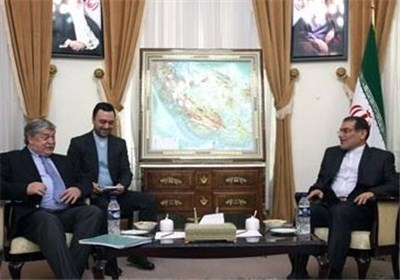 Speaking on Tuesday in a meeting with the visiting deputy of Russia’s supreme national security council Yevgeny Lukyanov, Shamkhani added that Tehran-Moscow ties have not been defined against the interests of any third party.

He said other countries should not be allowed to disrupt the relations between Tehran and Moscow.

The Iranian security official further noted that Iran-Russia security cooperation would pave the way for boosting relations in other areas such as the economic field.

Shamkhani, who is also the Supreme Leader’s representative in the Supreme National Security Council, further praised Moscow’s resistance against the excessive demands by the supporters of terrorist groups in Syria.

Lukyanov, for his part, stressed Moscow’s resolve to enhance strategic cooperation with the Islamic Republic of Iran and hoped the Russian president and the country’s supreme national security council secretary will visit Iran in the near future.

Trade relations between the two countries have steadily increased in recent years, and include commercial ties in hydrocarbons as well as many non-energy sectors of the economy.