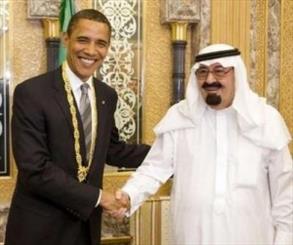 Obama and the kings

President Obama will go to Saudi Arabia next month to visit with King Abdullah. Also next month, Obama will meet with Jordan’s King Abdullah II in California. One can only imagine what the monarchs will have to say.

Both countries have spoken publicly and critically about what they see as U.S. retreat from the region and Obama’s weakness in dealing with Iran and its junior partner, Syria. Their concerns have only heightened with the interim deal with Iran and Syria’s slow-walking its disposal of chemical weapons.

Jonathan Schanzer of the Foundation for Defense of Democracies tells me, “The Saudis will tell the president what he already knows: that the treatment of Iran as a partner in its own disarmament is eroding the Saudis’ confidence in U.S. foreign policy; that the Saudis are fearful of an Iranian nuclear breakout and are unclear as to whether Washington has its back; that the U.S. decision to choose Iran engagement over the ouster of Assad has left a bitter taste; and that much of the Gulf bloc shares these sentiments.”

The question remains whether anything Obama says will ameliorate their concerns. Unfortunately, the impression of American reticence established over five years and witnessed by our foes and friends alike won’t be undone in private conversations with two Sunni monarchs. Action is what these leaders are looking for. Schanzer suggests that Obama may provide “new arms, defense agreements or other concessions  — to shore up Saudi confidence at this delicate moment.” But that doesn’t get to the root of the problem — namely the lack of American resolve, or even presence.

Right now the Saudis are arming rebels in Syria. The Saudis are threatening to get a nuclear weapon if Iran does. What it needs is for the United States, on the ground and in diplomatic dealings with Iran, to be as bold in defense of the West’s interests as the Saudis are in defense of their kingdom. As for Jordan, Obama is likely to hear about the economic toll taken from refugees. Jordan, like Turkey, has paid an economic and social cost for the ongoing civil war. And like Saudi Arabia, it feels the threat of Iran’s nuclear capability. If they don’t say so expressly to the president, they and/or their advisers will no doubt let the administration know that the Sunni monarchs would like a negotiated end to Iran’s nuclear weapons program. If not, U.S. economic and then military action. If not any of that, then they’d quietly be pleased with an Israeli strike.

What of the Palestinian-Israeli conflict? Frankly, neither of these countries expects anything much to happen, other than the appearance of “diplomacy.” They see John Kerry’s actions as necessary but inconsequential compared to the other problems in the region. Jordan’s security needs are closely aligned with Israel’s; both would need an ongoing presence of Israel troops in the Jordan Valley.

In short, Obama will be hearing pretty much what he hears from the Israelis. It may be grating to him to hear that the “Arab World” thinks of him and his polices much as the Israelis do, but he’d be wise to listen up. Like Israel, the Sunni Arab states want the United States to take a tough stance with mutual enemies and to demonstrate a willingness to use force if need be to defend its vital interests. Maybe coming from two kings, the message will have more impact on Obama than it does coming from Israel’s elected prime minister.