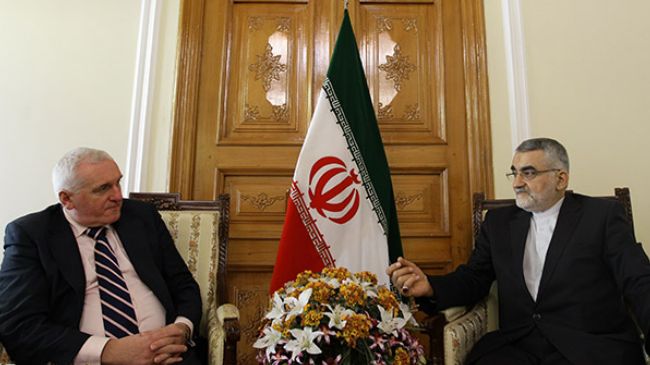 A senior Iranian lawmaker says the Islamic Republic is committed to implementing the Geneva nuclear deal sealed between Tehran and the six world powers.

“The Islamic Republic of Iran is committed to its obligations,” Alaeddin Boroujerdi, the chairman of Majlis National Security and Foreign Policy Committee, said in a meeting with former Irish Prime Minister Bertie Ahern in Tehran on Tuesday. He, however, said that Iran does not trust the US.

Iran and the five permanent members of the UN Security Council — Russia, China, France, Britain and the US — plus Germany clinched an interim nuclear deal in the Swiss city of Geneva on November 24, 2013. The deal took effect on January 20.

Boroujerdi also pointed to Iran-Ireland good relations and called for the development of bilateral relations in all sectors, particularly the parliamentary ties.

He said that Iran’s Majlis supports “constructive relations” with other countries based on “mutual respect and interests.”

He added that the Majlis and the Irish parliament can play an instrumental role in facilitating bilateral ties between the two countries in different sectors.

Ahern, for his part, said that Irish officials attach great significance to the development of friendly ties with Iran, which he described as an important country in the region and the world.

He also underlined the need for more consultation between the two countries to contribute to the resolution of problems in the Middle East.