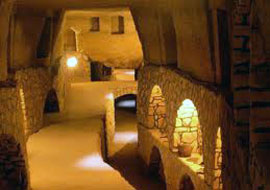 IBNA: Speaking with IBNA, Javad Safinejad, the father of Iran’s Kariz research and studies, said Kariz is one of the best techniques for water supply for agricultural purposes since old times in Iran.

As he said, the length of Iran’s Kariz fields is nine times the size of a road that stretches around the earth.

The writer of numerous works in Iran’s kariz technology added that Iran has 80,000 kilometers of kariz.

He further argued that the Great Wall of China is 7000 kilometers while Iran’s kariz technology exceeds 80,000 km so it should be added to the world wonders.

Javad Safinejad was born in 1929 in Rey, southern Tehran. He has so far released numerous titles on irrigation techniques in Iran, geography and anthropological studies in Iran.

A kariz or qanāt is one of a series of well-like vertical shafts, connected by gently sloping tunnels. They create a reliable supply of water for human settlements and irrigation in hot, arid and semi-arid climates.