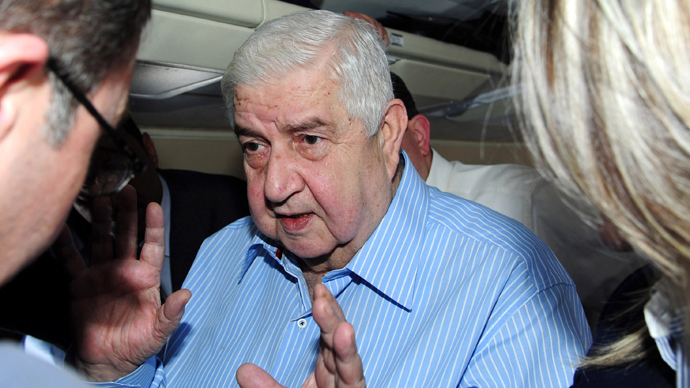 The Syrian FM claims to have rejected a US offer of direct talks without the involvement of the opposition “tools” during the Geneva conference over John Kerry’s refusal to apologize for his biased speech. US officials denied seeking such a meeting.

On his way back to Syria, the country’s foreign minister Walid Muallem was asked why hadn’t the Damascus delegation spoken directly with the US without intermediaries from the opposition delegation.

“Frankly, the Americans have asked for that in Montruex and I refused unless Kerry apologizes for the speech he made in the conference,” Walid Muallem told Syrian state media on board a plane bound for Damascus.

Syria’s foreign minister was apparently referring to the opening remarks of US Secretary of State John Kerry’s speech made in Montreux, Switzerland on January 22, who said that President Bashar Assad lost all legitimacy and cannot be a part of any transitional government.

“There is no way, not possible in the imagination, that the man who has led the brutal response to his own people could regain legitimacy to govern,” Kerry said in that speech. Walid Muallem rebuffed him at the time, saying no outside force had the right to “withdraw legitimacy” from the president or government except for the people of the country.

The US officials were quick to deny claims by Syria’s foreign minister that US diplomats were seeking direct negotiation with the Syrian delegation.

“At no point did the United States offer to negotiate directly with the Syrian regime,” State Department spokeswoman Jen Psaki said, though clarifying that the US indeed offered to connect with Syrian officials “on a staff level” through the United Nations and Joint Special Representative Lakhdar Brahimi.

Psaki added that the State Department will never apologize for the views expressed by the top US diplomat. “At no point will Secretary Kerry ever apologize for speaking the truth about the brutality the Assad regime has inflicted on the people of Syria,” she said.

The peace talks that ended in Geneva on Friday producing no concrete results and no official commitment from Damascus delegation to return to the negotiation table on February 10. The government and opposition were unable to bridge their differences on ceasefires, humanitarian corridors or the question of a transitional governing body.

In a security conference in Munich, the UN Secretary-General Ban Ki-moon said that he urged Russian Foreign Minister Sergey Lavrov and US Secretary of State John Kerry “to use their influence to ensure the talks proceed as scheduled on February 10.”

Lavrov insisted that “Russia can do nothing alone” as he asked the US to apply their influence on the Syrian opposition.

Muallem, meanwhile, warned the opposition will eventually suffer a “reality shock” unless they abandon their “illusions” and drop unrealistic demands.

The Assad delegation has sought to focus the discussions on brutal acts of terrorism, and Muallem accused the opposition delegation for refusing to sign a declaration condemning such activity in Syria.

“This rejection is a smirch on the forehead of the coalition’s delegation, and as I said yesterday that any person in the world who suffered from terrorism would adopt this draft statement,” Muallem said, adding that the foreign-based coalition who “live in 5-star hotels” knowing nothing about the Syrian reality.

The Syrian foreign minister also lashed out against the “unjust” international community that impose sanctions on a war-torn country.

“It is an ‘international community’ that adopts double standards policy and mostly dominated by the US… they dominate the UN Security Council and the UN,” Muallem said.

Muallem questioned how could the West want to be involved Geneva dialogue and at the same time“impose sanctions on the Syrian people and children?” He asked European Union’s foreign policy chief, Catherine Ashton to explain how can the West can sanction a ban on food products yet at the same time discuss the issue of humanitarian aid shipments.

The foreign minister concluded by saying that in the negation process, Syria will refuse anything that contradicts the constitution.

“This constitution was reached by a referendum and no one can reach or even think that the presidency is a topic of discussion.”