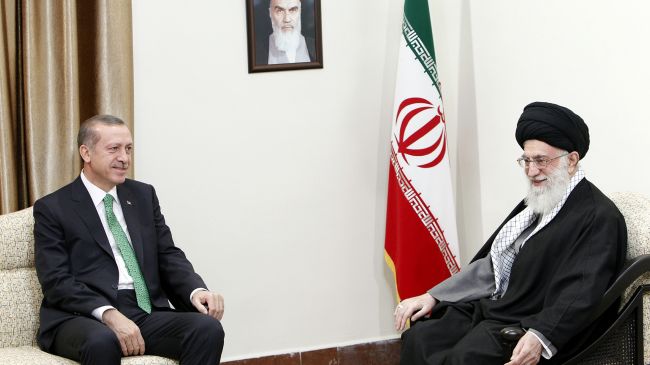 Iran–Turkey relations: Between competition and cooperation

Istanbul, Asharq Al-Awsat—Following Turkish Prime Minister Recep Tayyip Erdoğan’s visit to Tehran earlier this week, it appears that relations between the two regional powers are once more on the rise. This rapprochement follows a cooling of ties as a consequence of the ongoing Syrian conflict in which the two regional powers are backing different horses. Erdoğan’s visit to the Iranian capital concluded with the establishment of a Turkish–Iranian high-level cooperation council, in addition to mutual pledges to extend bilateral trade over the coming year.

“I hope 2014 will be a milestone year for both countries and that we reach a 30 billion US dollar trade volume by the end of 2015,” Erdoğan said from Tehran, adding that he views Iran as his “second home.” While Iranian Foreign Ministry spokeswoman Marzieh Afkham affirmed: “Our relations with Turkey have entered a new phase and we hope this trend continues. Besides serving the interests of the two countries, we hope our dialogue [with Turkey will] serve regional interests as well.”

A history of rivalry

Both Iran and Turkey’s imperial legacy of rivalry continues to influence the state of diplomatic relations today. With the collapse of the Ottoman Empire and the ascent to power in Turkey of the secularists under the leadership of Mustafa Kamal Atatürk, relations between Iran and Turkey began to blossom. On April 22, 1926, Turkey and Iran signed their first official “treaty of friendship” in Tehran. A few years later, the first official border treaty was signed between the two powers, an officially bilateral agreement on the demarcation of the Iranian–Turkish borders which had remained virtually unchanged since the 15th century.

Following the Second World War, the countries grew closer in the face of “the Soviet threat” and stood as bulwarks against Communist expansion in the region. During this period, secularist Turkey and the Shah’s Iran forged an alliance with the United States, developing their military capabilities and securing greater dominance in their respective regions. However, change was on the horizon.

The period of 1979–1980 was one of great change in the region, not least for Iran and Turkey. Iran witnessed the end of the Pahlavi dynasties and the birth of the Islamic Republic, which promptly took a confrontational stand against the US and its allies. As for Turkey, military officer Kenan Evren led a military coup in 1980, taking over the state. As a result, Iranian–Turkish relations experienced a period of détente following these political upheavals. Bilateral relations recovered somewhat during the Iran–Iraq War, with Tehran making overtures to Ankara for economic relief.

The rise of the Islamists

In comments to Asharq Al-Awsat, Mehmet Şahin, a professor of international relations at Turkey’s Gazi University and an expert on Iranian affairs at Ankara’s Institute for Strategic Thinking, affirmed that relations between Iran and Turkey were significantly affected by the events of 1979 and 1980. He added that since the Islamic Revolution, relations between Tehran and Ankara have remained at a historically low level.

“This stems from two reasons: first, the historical political struggle between the two countries, and second, the disturbance that the success of the Iranian revolution caused for countries in the region, especially Turkey,” Şahin said.

Linking the Islamic Revolution with the subsequent military coup in Turkey, Şahin described the birth of the Islamic Republic as the “direct cause” for Kenan Evren’s coup.

A new regional conflict between Iran and Turkey broke out following the collapse of the Soviet Union and the ensuing chaos that governed this period, with each country attempting to secure and expand its own regional influence. Turkey rushed to sign several economic and cultural agreements with post-Soviet States while tensions between Tehran and Ankara escalated over Azerbaijan and Armenia.

After the Islamist Justice and Development Party (AKP) rose to power in Turkey in 2002, relations between Tehran and Ankara improved considerably over the past decade, but remained captive to low-level sectarian dissonance.

Dr. Naseeb Hateet, a Lebanese expert on Iranian affairs, affirmed that Tehran had sought to neutralize the growing influence of Sunni political Islam in the region, putting an end to the traditional Sunni–Shi’ite strife, at least on a political level. This was largely out of self-interest, as this phenomenon had begun to affect Iran’s role and position in the region. It was this need that ultimately prompted the Turkish–Iranian rapprochement.

Speaking to Asharq Al-Awsat, Hateet said it was the twinned attraction of an Islamist party ruling a secular political system that prompted Iranian interest in strengthening its ties with Turkey.

Although this rapprochement has witnessed a significant step-back following the Syrian crisis, political experts have warned against overstating the Iranian–Turkish rift.

“The geopolitical situation in the Middle East may change, but there will always be agreements between countries on the basis of shared interests regardless of differences in opinion on a particular topic or dilemma. For this reason, I believe that the closer Iran grows to the West, the more likely it will abandon some of its stances on Iraq, Lebanon and Syria. Iran will sell out Syria to the West if an agreement and reconciliation can be reached, particularly as Iran is experiencing its own economic problems,” Hateet said.

The most recent step in the Turkish-–Iranian diplomatic dance appears to demonstrate that relations between Tehran and Ankara are waxing, not waning. Following last year’s historic Geneva nuclear agreement between Tehran and the P5+1 group of states—the five permanent members of the UN Security Council, plus Germany—Iran appears to be taking a less intransigent diplomatic line, even taking into account its involvement in Syria. As for Erdoğan, he is in dire need of a diplomatic victory, particularly in light of the numerous domestic challenges currently facing his government, not least the ongoing graft scandal. Erdoğan was tellingly accompanied by Turkey’s economy and energy ministers in this week’s visit to Iran, and a number of non-political agreements were signed between the two sides.

“I would like to mention specifically, and to express my satisfaction with, the agreement we signed on the preferential trade area,” Erdoğan said this week, adding that Ankara is set to announce an increase in the volume of oil and gas imports from Iran in the coming days.

Hateet informed Asharq Al-Awsat that there is clear Turkish interest in responding to Iranian overtures, adding that, at this point, Turkey needs Iran more than Tehran needs Ankara. In this case, it is extremely likely that the forthcoming period will see Turkey and Iran strengthening their bilateral relations, despite any lingering issues over the Syrian conflict.

President of Turkey’s Center for Middle Eastern Strategic Studies, Dr. Şaban Kardaş backed this reading of events. He told Asharq Al-Awsat: “Despite the differences in opinion between Turkey and Iran on some regional issues, they are compelled to cooperate with one another by virtue of the fact that they are neighbors, and based on their own relations with other neighboring countries.”

In view of all of this, Kardaş said that he believes that Iran and Turkey are “destined to cooperation.”

“Turkey needs Iran as much as Iran needs Turkey. They are the strongest countries in the region, economically and geopolitically. They are both smart enough to approach their relationship from areas of agreement, not from areas of contention.”

This concept was echoed by the Iranian Foreign Ministry earlier this week. “As two neighbors and Muslim countries, Iran and Turkey enjoy many commonalities and many cooperation opportunities,” said Iranian Foreign Ministry spokeswoman Marzieh Afkham. Therefore, while political ties between the two countries have waxed and waned in the recent period according to national interests, economic cooperation has held steady. Iranian officials estimate that trade between the countries stood at 22 billion dollars in 2012, dipping to around 20 billion dollars in 2013, and rising to 30 billion dollars by the end of 2015.

Turul Ismail, a professor at Ankara’s TOBB University of Economics and Technology, acknowledged that while modern relations between Iran and Turkey have always been in a state of perpetual motion, vacillating between confrontation and cooperation, both sides have always erred on the side of cooperation.

“Therefore, and regardless of the competition or rivalry between the two countries, Iran and Turkey are destined to cooperation. We could describe this situation as ‘cooperation amid competition.’