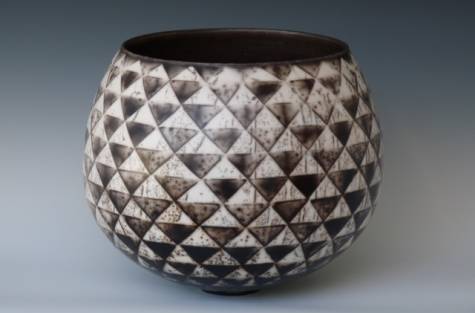 Public and private lives of Iran in art

Nargess Hashemi’s explores what home means to the women of modern Tehran through pen drawings of Iranian architecture and carpets.

Iranian artist Nargess Hashemi’s beautiful patterns, created with pen on graph paper, take doodling to a different level in her latest show, “The Pleasure in Boredom”. Hashemi is known for her figurative works such as paintings of domestic scenes in ordinary homes and royal palaces. But the figures are missing in this new body of work. Instead, the idea of home and of the private life of people is conveyed through empty architectural structures in the “Home” series, and through the carpets found in every Iranian home in the “Carpet” series. The artist takes the idea of doodling even further in a series of irregular, amoeba-like macramé pieces, created without following any pattern.

The show includes some artworks from Hashemi’s “Qajar” series, where figures of dancing girls and royalty, taken from the paintings of the Qajar era are placed on flattened perspective, cross-sectional, architectural backgrounds commonly seen in miniature paintings from the earlier Timurid and Safavid periods. This enables viewers to see the artist’s progression from these figurative works to the “Home” series, where the figures have been removed, while the architectural silhouettes of empty cityscapes and rooms are highlighted; and then on to further abstraction in the “Carpet” series, which metaphorically takes viewers inside the architectural structures.

Hashemi has always enjoyed doodling, but her pen drawings on graph paper are a refined version of that subconscious and intuitive process. Simple repeated geometric shapes and floral motifs in the minute 1mm-by-1mm squares on the graph paper have been built up to create complex, decorative patterns similar to the designs on handwoven Oriental carpets; and several sheets of graph paper have been combined to create diptychs and monumental works. A closer look reveals that the manner in which she moved her pen over the lines on the paper is similar to the way a weaver’s hands manipulate the warp and weft, while weaving a carpet. Mistakes are visible, revealing traces of the human hand and underlining the fact that the patterns are not digitally generated.

Beyond the aesthetic layer, these artworks speak about the monotonous repetition, constraint and order of domestic life, and the restrictions in modern Tehran, especially for women. They also explore the duality that exists between the social persona of people and their real self, expressed only in the privacy of their homes.

“There are many things that one cannot say outside the four walls of one’s home. Sometimes people you know well socially seem very different when you see them in their home. And you can sense the state of the relationships within the family by the warmth or coldness you feel in a home. I wanted to depict the inner environment of a family by getting closer to the soul of the home. And I have used a carpet as a metaphorical representation of the essence of ‘home’ because it is an essential element of an Iranian house. Through the process of these drawings I am trying to find tranquillity and balance between the outside and inside,” Hashemi says.

Within the parameters of the squares on the graph paper, her process of creating these patterns seems free and instinctive. But the artist points out that she has complete freedom when she begins, but after a pattern is established she loses all freedom and is forced to continue it repetitively. “As human beings, are we ever that free to do whatever we want?” she asks.

Hashemi’s macramé pieces give her much more freedom to break away from restrictive patterns and be more open. Like most Iranian girls she learnt this art when she was a child. Hence, like the carpets in her drawings, the macramé works also represent the comfort of home and of old habits, reflecting the struggle of human beings to find a balance between our desire for freedom and new experiences, and our need for the security provided by familiar surroundings and norms.

Jyoti Kalsi is an arts enthusiast based in Dubai.

“The Pleasure in Boredom” will run at Gallery Isabelle van den Eynde until February 27.

“Dancing with the Wind and Playing with Fire” will run at The Majlis Gallery until February 11.