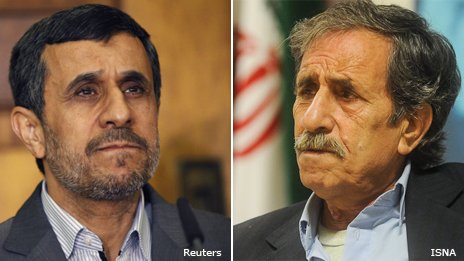 A well-known Iranian actor has said he was banned from acting for eight years because of his resemblance to former President Mahmoud Ahmadinejad.

Mahmoud Basiri made the revelation in an interview with the Iranian Students’ News Agency (ISNA).

He said he would not play the role of Mr Ahmadinejad unless he received consent from the former leader.

The 66-year-old actor is renowned in Iran for playing mainly comic roles on TV during his long career.

Mr Basiri, who is almost a decade older than the former president, said he had learned of the ban when he received calls from lawyers asking if he was aware that he was no longer allowed to perform.

This was following the 2005 election which Mr Ahmadinejad won.

“I used to laugh it off at first and could not believe it but the rumours gradually became a reality,” Mr Basiri said.

He complained that apart from a few fellow actors, no-one else seemed to care about what happened to him after he was banned.

Mr Basiri said his picture had even been removed from review clips of his TV shows in the eight years since he has been banned.

Mr Basiri is around a decade older than the former president

He said he had no issue with anyone and that he was fundamentally against character roles that make fun of individuals.

Mahmoud Basiri turned down a film offer that he said was “a project related to the presidential elections”.

The film producers who were offering him the role said they should get him a jacket similar to Mr Ahmadinejad’s trademark white jacket.

“I immediately got up and said: ‘Thank you very much, I don’t even want to drink your tea’. Then I left the meeting,” he said.

President Ahmadinejad’s trademark white jacket was a source of mockery for many Iranians and also for the media.

However, Mr Basiri said he had not ruled out playing the former president.

“If Mr Ahmadinejad gives me his consent one day to play him, I will do so,” he said.