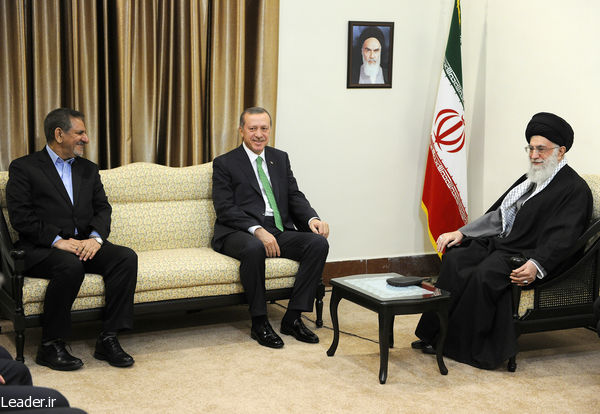 Iranian media put out Ayatollah Khamenei’s declaration of unique “brotherly ties, affection and friendship”: “The two sides’ extensive capacities are proper grounds for growing expansion and deepening of the relations.”

The political set-piece of the trip was the announcement of a joint committee, overseen by President Rouhani and Turkish Erdogan, to discuss and develop bilateral ties.

Vaezi also said there will be a “joint economic commission” in the near-future.

Iran is looking for a sharp increase in trade with Turkey, one of its biggest partners. While Ankara is talking of a rise to $30 billion from the 2012 level of $22 billion, Tehran has declared a goal of $100 billion within a few years.

Turkey is also a prime customer for Iran’s oil and gas, but the imports have been hindered by US-led sanctions.

Erdoğan said after signing memoranda of cooperation, “It is obvious that we import crude oil and gas from Iran, which are strategic energy sources, and we [will be] able to increase the volume of these imports.”

Revolutionary Guards: “Enemy Will Fail Decisively Against Us”; Minister of Defense: “US Threats Are Political Bluff”

The Deputy Commander of the Islamic Revolutionary Guards Corps has put out another defiant message to the US.

Brigadier General Hossein Salami said, “If the enemy acts in an intellectual or mental framework, they will fail decisively in confrontation with us….Unlike other armies of the world, the IRGC’s radius of influence is not confined to limited geographical spaces.”

Deputy Commander Ali Akbar Kharratian added, “Protection and safeguarding of the IRGC Navy’s news and information in operational and tactical fields has created fear and panic in the enemies.”

Meanwhile, Defense Minister Hossein Dehghan continued the week-long campaign against US Secretary of State John Kerry’s remark that “military options are still on the table” if Iran does not adhere to the interim nuclear deal:

In any case, it seems that the American officials’ statements are nothing more than a political bluff. Likewise, the previous US Secretary of State admitted that America’s military threats against Iran were a political bluff.