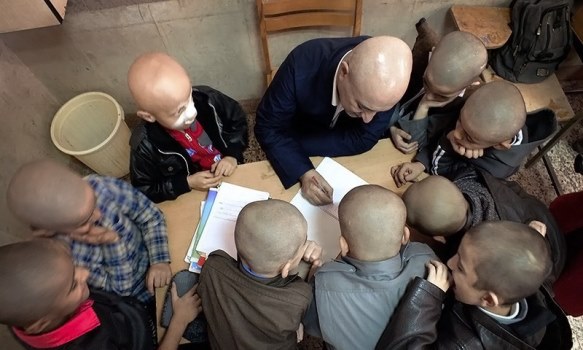 KARAJ, Jan. 29 (MNA) – An art activist in Karaj has shaved his head in solidarity with Mahan, Marivani student and cancer patient.

Afshin Sakhayi, a director, actor, and journalist from Alborz Province, had also called the public to make the solidarity a national campaign or even beyond so as to inform the public about these patients and collect donations.

Three weeks ago, the story of a teacher from Marivan stole the headlines of the Iranian news outlets. Mohammad Ali Mohammadian, teacher of the second grade school in Sheikh Shaltout Elementary School in Marivan, shaved his head out of solidarity with his student Mahan Rahimi who is a cancer patient. The students followed the suit and now, all the class has shaved heads. The action by the teacher now has stopped bullying Mahan, because all in the class are equally hairless.

We are all together

The Karaji art activist told Mehr News about his initiative to show support and solidarity with Marivani teacher. “Upon hearing the initiative by the humanitarian act by the teacher, I shaved my head in supporting the teacher and Mahan’s classmates’ great act so that the movement perpetuates around the country,” Sakhayi said.

“Through the slogan ‘We Are All Together,’ I initiated the movement to attract public’s support to the Marivani teacher and his students, and hope that I will not be the last ring of this chain. Giving hope and spirit is the most effective thing that can be done for such patients, and along with financial supports, could do much for cancer patients, since the costs of treatment of cancer has skyrocketed with country’s economy shrunken with sanctions,” the art activist said.