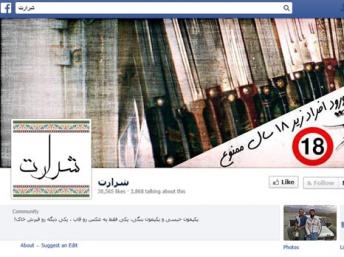 About eight months ago, a Persian-language Facebook group called Shararat, or Felony, was launched. Its aim: to publish photographs and stories about famous Iranian felons both in and out of prison, as well as to familiarize readers with the type of language used by them. The pages have recently been removed.

In early November last year, I wrote an article about Shararat for Iranwire entitled “Felons Come To Facebook”. The story – and reports that its pages contained violent photographs and text – was picked up by a number of Iranian media outlets. The Persian-language site Tabnak called it “the most horrendous sight in social media” and asked for the content to be removed.

A little later, in a news conference, Tehran’s police commissioner, Hossein Sajedinia, declared that the police were looking for the Facebook group’s administrators. “An agent outside the country is tracking the page,” he said, adding that the aim was to “find the operators and their accomplices in Tehran”.

“Facebook sent me a message stating that it had acted on my report about the felony page and removed it,” wrote Iranian reformist and political activist Saeed Shari’ati on his Facebook page. “I am grateful to Mark [Zuckerberg] and his colleagues for this favor.” He added that, in addition to the “the horrible and nauseating content”, he was not sure whether it was “run by felons and their cronies or by cyber-activists who wanted to smear Persian-language Facebook”. “In any case,” he added, “ I wish we could remove all manifestations of felony from our real and virtual lives so easily.”

Before it was removed, visitors could find out information about the following felons, identified by their nicknames: the Screwdriver, the Black, the Speckled, the Giant, the Carrot, the Cutthroat, the Elephant, the Tiger, the Shark, the Hog, the Panther, the Bucher, the Server, the Kurd, the Slaughterer, the Walnut, the Turk, the Murderer, the Thai, the Head, the Goat, the Foreigner and others.

The group’s masthead or cover image featured a set of knives and cutlasses, the principal weapons used by Iranian criminals. When visitors accessed the pages, they were met with a message  declaring that people under the age of 18 were not allowed to access the material. The group’s pages attracted more than 35,000 “likes” and a huge number of followers.

Whenever the administrator published a photograph of a famous felon, identifying the criminal by name, large numbers of people commented, some describing the activities of the criminal in question and their memories of him, and some denouncing his evil deeds.

But the fact that comments praising felons outnumbered other types of commentary was significant. Photographs of famous criminals in prisons across the country, in Tehran and Tabriz and other cities, were common.

Interestingly, those running the pages addressed their readers as “felons” too. On religious holidays, they either congratulated them or expressed their condolences, depending on the type of the holiday.