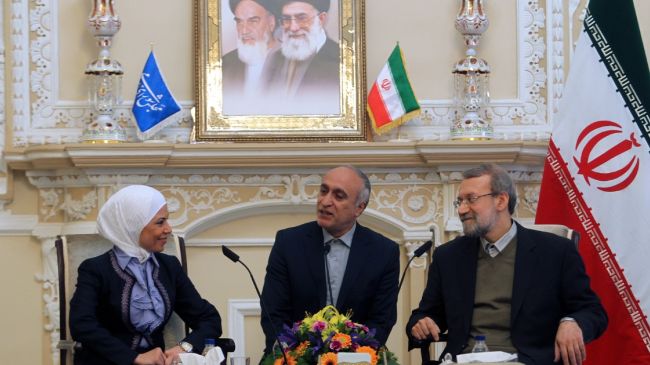 Iran’s Majlis Speaker Ali Larijani has reaffirmed the Islamic Republic’s support for the restoration of peace and security in Syria.

“The Islamic Republic of Iran always supports the establishment of peace and stability in Syria and will spare no effort to contribute to the restoration of peace and security in Syria,” Larijani said in a meeting with Syrian Minister of Social Affairs Kinda al-Shammat in Tehran on Tuesday.

He said that Syria is in a critical condition as enemies seek to create crisis in the Arab country to undermine the Syrian government and nation.

Larijani said that the crisis in Syria has to be resolved by the Syrian people and national political groups, warning that “foreign interference will spread the war in the country.”

He also called for the expansion of the ties between Iran and Syria.

The Syrian minister, for her part, praised Iran’s support for Syria.

She said that global powers, the Israeli regime and certain regional countries support the terrorist groups in Syria in a bid to harm the Arab country. She added, however, that the people of Syria will firmly defend their country against such plots.

She said that the Damascus government would resist until Syria is fully purged of the terrorists and security and stability is restored to the country.