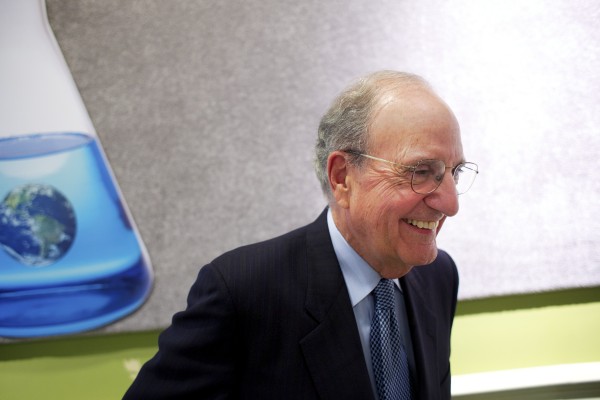 Former sen. Mitchell: US on proper course in Iran

AUGUSTA, Maine (AP) — The U.S. made the right decision to negotiate with, and ease sanctions on, Iran to give the country the chance to prove it doesn’t want to build a nuclear weapon, former Maine senator and special envoy to Northern Ireland and the Middle East George Mitchell said Tuesday.

But, he said, failure to reach a comprehensive agreement with the Islamic republic will accelerate and intensify instability in the Middle East.

Increasing U.S. sanctions now would be a step backward because they’re only powerful if they’re universal, said Mitchell, a Democrat who served 15 years in the Senate, including six years as majority leader. There’s no evidence that China and Russia would go along with new sanctions, he said.

“We would transform the current sanctions from universal to just U.S. sanctions and thereby, in fact, undermining their effectiveness,” he told The Associated Press.

In November, the U.S. and five other world powers and Iran agreed that the country would reduce uranium enrichment in exchange for the easing of international sanctions, providing some relief to Iran’s crippled economy. The six-month deal is supposed to give the countries time to develop a more comprehensive agreement to halt Iran’s nuclear program. The next round of negotiations are to begin next month.

Some members of Congress have recently pushed for new economic restrictions to be placed on Iran to increase pressure on the government, but President Barack Obama’s administration says that would jeopardize ongoing negotiations.

Mitchell, who’s credited with guiding negotiators in Northern Ireland to achieve the historic Good Friday Accord in 1998, was in Maine on Tuesday for the unveiling of his portrait that’ll be hung in the statehouse. Mitchell stepped down as special envoy to the Middle East in 2011 after efforts to rekindle Israeli-Palestinian peace talks failed.

Iranian leaders say they’re pursuing nuclear capabilities for peaceful purposes, not a nuclear bomb. But Mitchell said that the actions of the government have been inconsistent with those statements.

A long-term nuclear deal with Iran is essential, but turbulence in the Middle East is likely to continue for some time, even if an agreement is reached, he said. U.S. leaders must continue to bolster moderates in the region to combat instability in the region, he said.

“We should be concentrating our efforts on supporting the moderates within Islam who do want the same things that most people want around the world: freedom, opportunity and a chance for their children to get a good start in life,” he said.