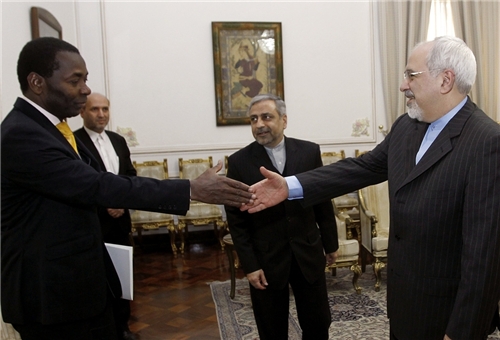 “Guinea, with its vast natural resources, has a lot of capacities for the presence of different sectors, specially Iran’s private sector for investment and implementation of development projects,” Zarif said in a meeting with GuineaConakry’s Ambassador to Tehran Bangali Diakhabi on Wednesday.

He wished good luck for the new Guinean ambassador during his mission in Iran, and expressed the hope that the two countries would further improve their mutual cooperation.

The Guinean ambassador voiced pleasure in his presence in Iran, and said, “We will do our best to broaden bilateral ties given the two countries’ good and friendly relations and we hope that with the support and help of the Iranian friends the two countries’ relations will further expands.”

Guinea, officially the Republic of Guinea, is a country in West Africa. Formerly known as French Guinea, it is today sometimes called Guinea-Conakry to distinguish it from its neighbor Guinea-Bissau and the Republic of Equatorial Guinea.

During the meeting with President Conde in the Guinean capital today, Amir Abdollahian said that Iranian President Hassan Rouhani has laid special emphasis on the further expansion of ties with Africa and the Islamic Republic of Iran is ready for enhancement of ties with Guinea in all fields.

During the meeting held on the sidelines of the 40th Foreign Ministerial Meeting of the Organization of Islamic Cooperation (OIC), the Guinean president deemed the recent agreement between Iran and the Group 5+1 (the five permanent UN Security Council members plus Germany) as important and voiced his country’s readiness to cooperate with Iran in all fields.