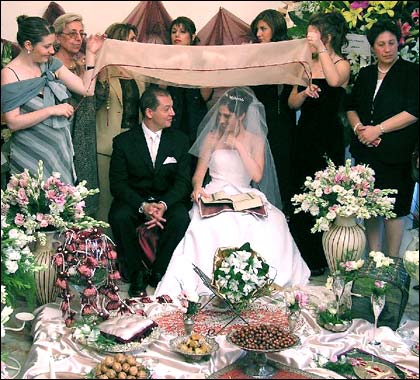 Cost is no consideration for lavish Iranian weddings 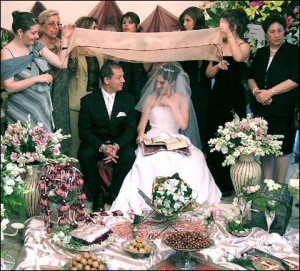 TEHRAN // At an engagement party in an upmarket district of Tehran, Narges, 26, and Ehsan, 30, discuss the cost of their upcoming wedding.

“All the girls in our family had big weddings. Mine should be bigger,” Narges said, as Iranian and international pop songs blared across the room and men danced together with women who were not wearing the hijab, breaking Iran’s conservative laws. “Everybody expects to attend a good party,” she added.

After two months of mournful Shiite rituals, Iran’s extravagant wedding season is under way and despite the Islamic Republic’s economic woes, young couples are buying into a demanding culture of lavish spending on getting married.

Narges and Ehsan are no exception. The couple, who are both from rich families, plan to spend about Dh331,000 (US$90,000) on their wedding in March, having already spent Dh55,000 on the engagement party alone.

A team of 20 English-speaking waiters wandered around a reception hall decorated with pink flowers, in the exclusive Zaferanieh district north of Tehran, offering non-alcoholic drinks and snacks.

Narges said she had spent Dh9,180 on a pink engagement dress to match the party’s theme. For the wedding, 400 people have been invited and Narges plans to wear a Dh36,730 dress from Spanish luxury brand Pronovias. The dress costs more than 30 times the average monthly salary in Iran.

The spending is not limited to Tehran’s more affluent families.

In the middle-class neighbourhood of Karaj, a city west of Tehran, Mohammad Ali,29, presented his fiancée Mina, 28, with a gold ring at a gathering of relatives.

“If it was up to me I would definitely cut extra expenses,” said Mohammad Ali, who like the other couple interviewed for this story, declined to give his last name. “I just wanted to get her a plain gold ring, but the traditions aren’t easy to bypass.” Mina’s ring was a gold ring with 5 small diamonds, which cost 20,000,000 rials.

At least 200 guests attended Mina and Mohammad Ali’s “small family party” and his mother, Khatoon, highlighted the importance of weddings and related events.

“This is the Prophet’s tradition and we must do our best for young couples,” she said. “We are not rich, but all the family helped. It is just one night for them,” she added.

Mina has a bachelor’s degree in graphic design and works at a private graphic design company, commuting to Tehran every morning by train. Her husband-to-be imports medical equipment, and lives in the south-eastern part of Tehran.

Mina and Mohammad Ali both consider themselves middle-income Iranians but their wedding, although small by Iranian standards, will be an opulent affair.

They have hired a team including photographers, videographers, a DJ and a caterer who will prepare at least five main dishes.

“We had to do it because everybody else is doing it. All these expenses look unnecessary to me, but they are part of our culture.” Mohammad Ali said. “My parents are not rich, but they helped me with wedding expenses. To be honest, they were more insistent on a costly party than Mina and I.”

Across the city at this time of year, young couples can be seen waving from the windows of their wedding cars that have been covered with elaborate floral arrangements. Other drivers pull their vehicles closer to catch a glimpse of the couple and madly blast their horns.

A Dh55 monthly subsidy for all Iranians, introduced last year to offset rising food and energy prices, has created a budget shortfall.

Inflation has soared to 40 per cent, the rial has lost 50 per cent of its value since 2012 and unemployment among 15-24 year olds is at 26 per cent, according to Iran’s National Statistics Centre.

Yet even poor Iranians spend excessively on weddings, often beyond their means.

“It seems most Iranians confuse happiness with comfort in their lives. We think living in luxury is ideal,” said Mahmoud Sariolghalam, an aide to Iran’s president and a professor of international relation at Shahid Beheshti University. According to Mr Sariolghalam, the effort most Iranians exert to live luxuriously is mostly to show off to others.

The gifts that Narges and Ehsan have received underscore this attitude.

Ehsan’s father bought his son a Lexus, which costs the equivalent of Dh496,000 in Tehran, as an engagement gift. Ehsan, who holds a master’s degree in business administration, works at the family’s import-export business.

The gifts do not end there. Ehsan’s father is also buying the couple an apartment in Elahiyeh, another sought-after part of Tehran, where prices hover around Dh20,000 per square metre.

But the money Iranians spend on their weddings does not always buy happiness.

There were 70,323 cases of divorce in the country from March through September during the current Iranian calender year, which began on March 21, 2013, an increase of 13 per cent compared with the same period a year before, according to Iranian media.

In the capital, Tehran, one out of every 2.9 marriages, ended in divorce in the same period.