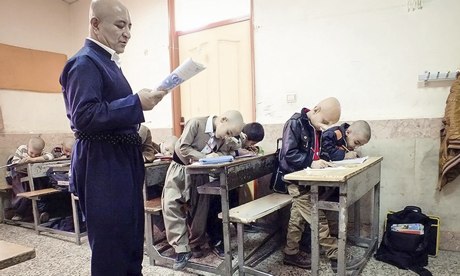 When Iranian schoolteacher Ali Mohammadian noticed that one of his students was bullied after going bald as a result of a mysterious illness, he decided to show solidarity and shave his own hair. In no time, his entire class shaved their heads and the bullying stopped.

Now, Mohammadian who teaches at Sheikh Shaltoot’s elementary school in Marivan, a Kurdish city in the west of Iran, has become a national hero. President Hassan Rouhani has praised him, the government has offered financial support for the pupil’s medical treatment and his story has reached the four corners of his country.

“I’m so happy that this has touched many hearts and people reacted enormously positive,” the 45-year-old teacher told the Guardian by phone from Marivan. “Everyone in the school now wants to shave their head.”

Earlier this month, Mohammadian posted a picture of himself with eight-year-old Mahan Rahimi on Facebook. “Our heads are sensitive to hair,” he wrote on the social network in support of his student. “Mahan had become isolated after going bald, smile had disappeared from his face and I was concerned about his class performance. That’s why I thought about shaving my head to get him back on track,” he said.