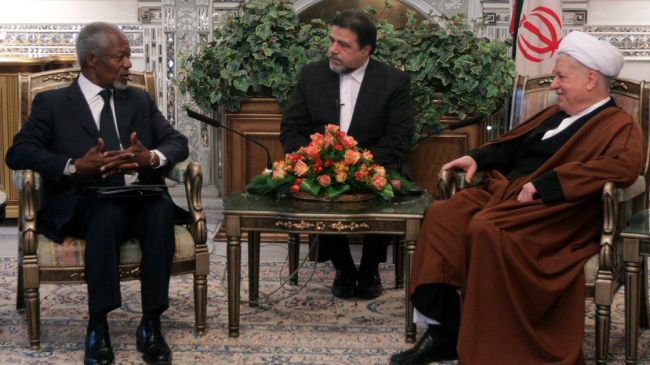 A top Iranian official has described the achievement of a world without violence as a humanitarian duty, calling on the internationally renowned and reputable figures to realize their potentials and help contain violence in the world.

Annan is visiting Iran as the head of a group of former global leaders known as the Elders. It is the Elders’ first visit to Iran as a group.

Rafsanjani censured bloody conflicts across the world, particularly in the Middle East, and stated that global arrogance and colonial powers play a dominant role in the outbreak of such incidents.

“Through injustice, they first make people reach the end of their tether and then deceitfully turn them against each other,” the senior Iranian official commented.

The chairman of the Expediency Council also held arrogant powers accountable for the rise of terrorist groups in the world.

“The fire that these powers have ignited will one day inflict upon themselves as we can see that such a thing has already happened in many countries,” Rafsanjani noted.

When asked by Rafsanjani why he quit his mediation efforts to bring an end to Syria’s crisis, Annan stated that the UN measures fell short because many of the countries that had initially made commitments reneged on their pledges.

Turning to ongoing conflicts in some parts of the African continent, the former UN chief said attempts will be made to prevent African people from falling prey to ethnic and sectarian violence.

Brought together by South African anti-apartheid icon Nelson Mandela in 2007, the Elders are twelve independent global leaders who use their collective influence and experience to promote peace, justice, and human rights worldwide.

According to the group’s website, the purpose of their visit to Iran is “to encourage and advance the new spirit of openness and dialogue between Iran and the international community, and to explore what could be done to enhance cooperation on regional issues.”