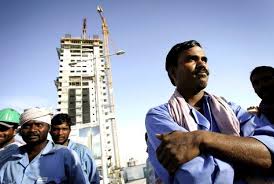 VADODARA: Two Indians allegedly confined to a guesthouse in Iran’s Zanjan city by a private engineering firm have been released.

Vadodara resident Sanket Pandya (36) and Mohammed Hussain Khan (hailing from Haryana), working with an India-based private company, had been allegedly detained and their passports taken away by the engineering firm since over a month following a business dispute with the company.

Last week, Sanket’s wife Priti Pandya and her brother Dilip Pathak had written to Sonia Gandhi and approached the Centre requesting help in securing the release of the duo.

Later, officials of Indian embassy in Tehran got in touch with both the Indians kept in the guest house in Zanjan city and made arrangements to bring them to the Iranian capital city by road on Saturday last.

Both the Indians have now been kept in a hotel in Tehran city since their “release.”

Priti said she got a call from her husband late last night informing her that he and his colleague were “released and kept in a hotel in Tehran under the protection of Indian embassy.”

She said she talked to both Sanket and Khan and they sounded happy to be free after over a month.

The two would be flown back to India after completion of some required legal formalities, sources said.

The two were confined and their passports were taken away by the company under the pretext of stamping them on December 17 last year. However, Pandya was allowed to speak to his family members and officials of the company over phone.

Pandya’s family members had earlier sought intervention of the PMO and the External Affairs ministry to ensure “release” of the duo and also approached local BJP MP Balkrishna Shukla for help.

Shukla had got in touch with the owners of the company and also written letters to Prime Minister Manmohan Singh, external affairs minister Salman Khurshid and Gujarat chief minister Narendra Modi apprising them about the incident and sought their help.