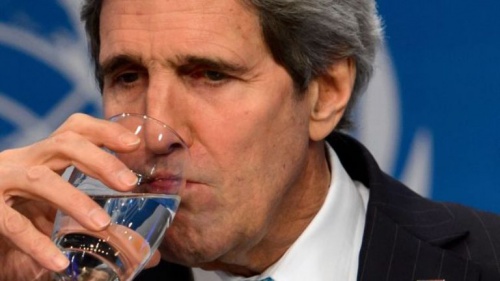 This week, Secretary of State John Kerry issued what sounded like threats against Iran. He promised swift and powerful military action if Iran failed to meet promises it made in an agreement with the P5+1.

What wasn’t announced is that Washington itself is under alert, an advanced system designed to shoot down cruise missiles hastily thrown up to defend the capitol. After the attacks on September 11, 2001, Secretary of Defense Rumsfeld stated that missiles were used to attack, not just the Pentagon but World Trade Center.

From a transcript dated October 12, 2001 taken from the website of the US Department of Defense today:

“It is a truth that a terrorist can attack any time, any place, using any technique and it’s physically impossible to defend at every time and every place against every conceivable technique. Here we’re talking about plastic knives and using an American Airlines flight filed with our citizens, and the missile to damage this building and similar (inaudible) that damaged the World Trade Center. The only way to deal with this problem is by taking the battle to the terrorists, wherever they are, and dealing with them.”(Secretary of Defense Donald Rumsfeld)

Washington is now on high alert for a missile attack that may well be nuclear, a repeat of the attacks Rumsfeld spoke of that the press, military and congress managed to conveniently forget.

Is America facing another “terrorist attack” if it fails to comply with Israeli demands? As we check the list of nations whose submarines are capable of approaching the US coast and are limited to cruise type missiles, the list is a short one, very short. The Germany built Dolphin type submarine is such a system.

Iran has never, in any way, manner or form, indicated anything but a desire to keep its promises. In fact, no one has been able to fault Iran in any way.

The agreement with Iran over nuclear enrichment has been a stunning success lauded not just around the world but by the people of the United States. Why then has Kerry used language so strong that Iranian military leaders have taken time to point out that the United States simply can’t attack Iran, not and survive economically?

What is sad, remarkably so, is that Kerry’s statements weren’t made for Iranian ears. Kerry, along with President Obama and key military leaders are in a life and death struggle to hold together constitutional control of America against an unprecedented assault.

The United States has begun to unravel politically as though it were a “banana republic.” Sixteen senators from Obama’s own party, the most corrupt and inept, have joined the GOP, always the party of rabid extremism and “big business” in an attempt to derail an agreement that America is only one of seven nations involved.

America can never be pushed to war by its legislature, a generally hated group, individuals whose offices are now bought and sold on the open market.

Following Menendez is Senator Lamar Alexander of Tennessee, co-sponsor of the sanctions bill. Today, his Chief of Staff is said to have committed suicide after being arrested for child pornography. None in Washington believe this.

Rumors floating around the capitol state tell of a child sex ring, dating back to the Bush (43) presidency. The political struggle in Washington has pushed the Obama administration to go after the “sacred cows,” child sex rings, drug cartel bribery and much more.

Most following the breakdown of constitutional authority that started with “sequestration” months ago credit the American Israel Public Affairs Committee for orchestrating the attacks. Long accused of illegal lobbying, buying and selling military secrets and controlling Washington’s power elite with bribery, blackmail and intimidation, AIPAC now stands politically at opposites with those Americans that back President Obama by wide margins.

AIPAC, which along with Abe “The Fox” Foxman’s Anti-Defamation League, have openly abandoned their constituency and joined with the drug cartels, oil speculators and organized crime, the groups that seek to profit from increased Middle East tensions.

In 2010, Iran opened its first facility to produce “yellowcake” uranium, a step in the manufacture of fuel for a nuclear power plant.

However, in an interview today with Gene “Chip” Tatum, former CIA operative involved in the Reagan “Iran Contra” scandal, we learned of how Iran’s peaceful nuclear energy program received its fuel.

It was President Reagan who personally authorized the transfer of yellowcake from Africa to Iran based on a White House intelligence assessment that Iran’s revolutionary government would put its new reactor to peaceful use.

Pilots who delivered the material have signed statements. Other documents will soon be published.

What these documents show is that many of those, the “neocons” now supporting war with Iran, were those who originally approved of American support for Iran’s peaceful nuclear energy program.

The “neocon cabal” calling for sanctions and even nuclear strikes on Iran were, in fact, active proponents of Iran’s nuclear program.

Washington is under siege. It isn’t just the emergency missile defense system on the skyline or legislators facing arrest or disappearing.

The military, for many months steeped in scandal, is now undergoing a full and total cleansing, starting with the already scandal beleaguered nuclear forces.

What is lacking is courage and trust in the American people. The primary accomplishment of the Obama presidency, at least in the area of foreign policy, should be normalization of relations with Iran.

Where Obama has failed has been in his unwillingness to speak honestly to the American people, admitting that Bush era policies toward Iran were steeped in lies and corruption.

Instead, Secretary of State Kerry mouths empty threats in what appears to be an attempt to derail an agreement he himself authored and, only weeks ago, vigorously defended.

He now humiliates himself when the truth is all that can save America. All but the blindly ignorant, and there are millions of those, are aware of the fact that congress is the real enemy of the American people.

Polls over this same issue show as many as 94 percent of Americans don’t just “disapprove” of congress but would disband it.