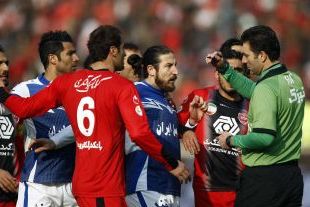 On Saturday, Teymourian has been banned for one match for his aggressive behavior towards referee Saeid Mozaffarizadeh during the derby.

Oladi and Sadeghian have also been charged with violent conduct in the match.

Persepolis and Esteghlal played out a goalless draw in the 78th Tehran derby held at the Azadi Stadium on January 17.

Sadeghian will miss Persepolis decisive match against Sepahan on Friday while Esteghlal will be without Oladi and Teymourian when they go to Kerman to face relegation-threatened Mes.