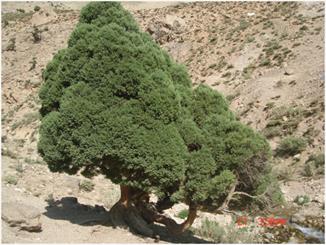 TEHRAN, Jan. 25 (MNA) – The oft-cited local officials’ intransigence on their whimsical plans would amount to damage on country’s natural reserve, this time in Lorestan.

The report by Mehr News wrote that Central Zagros enjoys unique and rare ecosystem, and because of ecological significance, and policies of Forest, Range Lands and Watershed Management Organization, the region has been the subject of special attentions.

Juniperus excelsa, commonly called the Greek Juniper, is a rare forest species whose geographical distribution is limited to Western Azerbaijan, Lorestan, Chahar Mahal and Bakhtiari, and Fars provinces, and has created valuable and rich habitat as scattered patches in these provinces.

Although juniper is highly resistant to pests and plant diseases, ecological stress by environmental and human factors has stymied the natural reproduction process of this rare species. Livestock farming in habitats, using tree branches as animal feed, and using tree trunks as fuel in winter and as rooftop cover in rural regions are the most important threats to rare Zagros species.

Recent reports by environmental advocates revealed political pressures applied by local government officials in Aligudarz to construct an access road to central village of Shoulabad administrative section which extends through this natural reserve. Houman Khakpour, an environmental activist says that construction of a road which starts from Gallebadoush defile would amount to extreme damage to the habitat, and it would trigger serious opposition by environmental activists and natural reserves experts.

It seems that political pressures behind the construction of an unnecessary road, to which other alternatives are possible, in the heart of the valuable and rare habitat home to many species, again seek to create new narrative of the old confrontation of unsustainable development and natural reserves and environment despite the oppositions voiced by the environmental activists. It is highly probable that at the end of the day, one of country’s ecological reserves is victim to the whimsical plans and vested interests of the local officials.